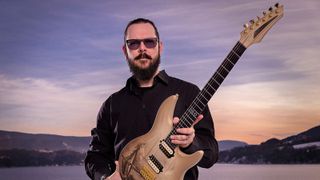 What influenced you to pick up a guitar?

I started out on piano when I was six or seven. But all along I was picking my parents’ acoustic guitar that they had lying around. I guess it fascinated me. I think I got my first electric guitar when I was 10, at more or less the same time I bought Kiss’ Rock and Roll Over. But I don’t think there was one particular song or band that made me go for the guitar. It was just my kind of craving to write rock music.

What was the first guitar you owned?

It was a black Fender Strat knockoff with a white pickguard. I was 10. It was a brand called Boogie, like in Mesa Boogie. It didn’t say “Mesa” on it, but the logo looked exactly like the one on the Mesa Boogie amps. I don’t know how that came to be, or whether it was just some people who ripped off that name. But I’ve never seen it anywhere else. It played pretty well — my father took it to a local tech who put some Fender pickups in there and switched out some of the hardware. It stayed at my father’s place long after I moved out, because by then I had other guitars. But four or five years ago I got it back from him. It’s in my kid’s rehearsal space at home.

What was the first song you learned or mastered?

I can’t remember exactly, but what influenced me most was playing along to Iron Maiden’s Seventh Son of a Seventh Son. Because at some point I got a tablature book for that, and I only had that one book. So that was my official schooling. [laughs] And then, the older brother of a guy in my class had the Somewhere in Time book, so I learned that, too. To this day it’s very rare that I can write a single guitar riff; I always end up with a second part. And I think that is very much due to growing up with Iron Maiden!

What do you recall about your first time playing live?

I started playing in bands almost right away, because that’s just how it worked in those days. By the time I was 13 I had met Samoth, my colleague from Emperor, and I joined his band. He was a year older than me, but the other guys in the band, they were even older, like 16. They had mopeds. In my world they were like grown-ups! And they were writing their own material, and had already been to a studio and recorded a demo. The band, I think it was called Loud and Clear. [laughs] We played at a local youth club.

Have you ever had an embarrassing moment onstage?

I remember this one from back in the Emperor days. Nothing really went wrong, but it was a feeling of embarrassment. It was the last song of the set and I broke a string halfway through. There was no time to change guitars, so I thought, "Okay, I’ll take the guitar off and finish the set without it." Because there was just a couple minutes left, and to stand in front of a crowd with just a microphone — I don’t think I’ve ever felt that naked in my life! I will never perform without a guitar on my stomach again. Because when I have a guitar on my stomach I can do anything. But take the guitar away and I might as well be there naked. I don’t think anyone else really noticed but it was just this feeling that I wasn’t prepared for.

Is there a particular moment on the new album, Ámr, that makes you proud as a guitar player?

It would probably be the guest solo by Fredrik Åkesson of Opeth! [laughs] He’s on “Arcana Imperii,” which is the first single. He plays the insane fast stuff. I handle a small lead in there as well but he’s in a different league altogether from most guitar players, I think. So that’s something to look out for if you want some proper shredding!

You’re considered one of the fathers of the second wave of black metal. Do you still feel connected to that style at this point?

Creatively, I actually still feel very connected to it. But not as a scene. This is something I’ve become more and more aware of since going solo and doing all these kinds of musical experiments for myself. It still feels like that core creative force, that kind of musical ideal, that magic element — that is very much the same. So I don’t mind what people call my music, but to me it still feels like black metal. Because even though I change up all the sounds and maybe the matters of how I get there, a lot of the core atmosphere that I go for — this kind of dark, existential dilemma — is still the same. It’s just the music that has changed. But my reasons for doing it haven’t.

What is your favorite piece of gear?

My Aristides guitars. I have six of them, and I just mix and match them all the time. They are instruments of such detail and such refinement. They’re made of a composite material called Arium that is meant to simulate perfect wood. It just resonates and sustains so well, and is balanced in all registers. I have six, seven and eight string models, and I even have a fanned fret eight-string. I’ve never been able to pull off all my six-string songs on an eight-string with a 28-inch scale length before. It’s just too stiff and hard. But with these I can easily pull off a full Ihsahn show with just the one guitar. I think I actually have all their models now!

Any advice for young guitar players?

You should play guitar for yourself. You don’t start playing guitar because your grandma would like you to or because you think it will get you girls or anything like that. You play guitar because you love it. And by doing that, if you do it enough, you might get so good that someone else might appreciate your playing. If you approach guitar playing, and music, with that state of mind you really can’t be disappointed. Because whether you succeed outside of that or not, no one can take that core experience from you.