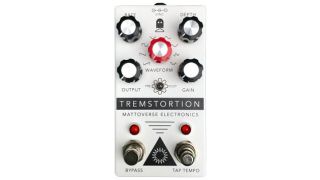 Looking to add some tremolo to your sound? Maybe a little dirt? How about both?

Then look no further than Mattoverse’s TremStortion, a new effect pedal that, in the company’s words, offers up “wacky waveforms and gallons of gritty gain.”

The pedal boasts controls for rate, depth, waveform, output and gain, along with a three-position toggle that allows for placing the tremolo pre-gain, post-gain or “mystery inversion.”

The TremStortion is available for $179. For more information, head to Mattoverse.