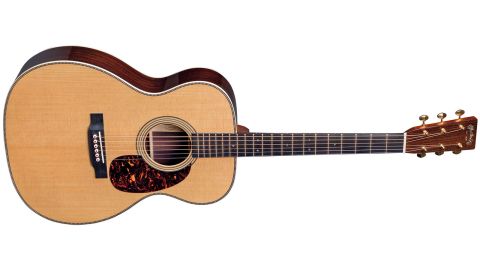 Possessing a clear harmonic range, ultramodern features and vintage-style appointments, the Martin 000-28 Modern Deluxe is by far one of the most responsive and satisfying acoustics available.

The old adage “If it ain’t broke, don’t fix it” has always been a guiding principle for me when it comes to reviewing gear, but boy, I love being proved wrong. Earlier this year, Martin unveiled their brand-new Modern Deluxe series that’s comprised of the D-18, D-28, 000-28 and the OM-28, and I must admit, I was a bit skeptical.

In other words, outside of electronics, how do you improve these timeless Martin acoustics? Well, Martin, far from being in retrograde, surprised me by pushing the forward-thinking envelope here.

By injecting ultramodern features, introducing elegant appointments, and without compromising the look and vibe of these legendary acoustics, the result is a stunning modern classic, with instantly noticeable improvements in sound and feel.

For this review, I chose the 000-28 Modern Deluxe, mostly because its Goldilocksian fit projects the volume of the venerable D-28 and the tonal sweetness of the OM-28.

The Modern Deluxe series strikes a fine balance between traditional in appearance and cutting edge for materials and build, enough so that players and purists alike should agree the current iterations of these tried-and-true models are a significant advancement from their vintage counterparts.

What’s new is a titanium truss rod, which not only is stronger, but is more than half the weight of a steel one. Another remarkable state-of-the-art inclusion is the Liquidmetal red dot bridge pins and a composite carbon fiber bridgeplate, which together, perceptibly boost the acoustic’s volume between 3-4dBs.

Possibly the most prominent aspect of this acoustic is the slightly asymmetrical neck shape (which had been replicated from a 1930 OM-45 found in Martin’s museum collection), and which is found on all the Modern Deluxe series’ mahogany necks. Other premium appointments include gold open-gear Waverly tuners, gold frets on its ebony fingerboard, and an abalone inlaid 1930’s script logo on the headstock.

Once in your hands, two of the most striking facets of the 000-28 are how extraordinarily lightweight it is, and the very slim neck profile - which is probably the slimmest I’ve encountered on a Martin.

At first, I was concerned it might be too thin, so I compared it to my own OM-28, and after months of playing the 000-28, I’ve found its neck carve along with its “High-Performance Taper” to be one of the most comfortable and stable necks I’ve experienced.

No doubt, there will be some finicky sticklers debating the millimeters of its contours, but to them I say the neck’s uniquely narrow profile made me feel more connected to the fretboard for fingerstyle playing and made elongated chord stretches effortlessly possible without hand fatigue.

Since I already own an OM-28, I gravitated toward the 000-28 because of its shorter scale length (24.9” compared to the OM-28 at 25.4”), which makes the 000-28 considerably more enjoyable to play sitting down, and offers a wonderfully supple string tension. But what will knock you out is the life-sized loud volume it produces that belies its small-bodied 000-size.

Strumming the 000-28 exposes a crisp chime that’s detailed and brightly warm, but it also mellifluously sings with a dimensional midrange and low end that resonates deep within the guitar’s body. You can actually feel the guitar vibrate when pressed against your body. Even flat-picked, it is relentless in keeping all your notes even and balanced. For all its liveliness and broad tonal range, the Modern Deluxe 000-28 is unforgettable.