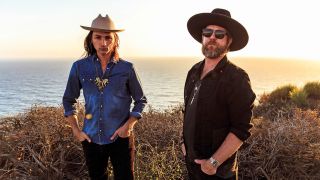 Devon Allman took a year off the road after the May 2017 death of his father, Gregg Allman, to rest and contemplate. After about six months, he had an epiphany about what to do next: hook up with his old friend Duane Betts, son of Dickey Betts. The two shared a unique bond as fellow offspring of Allman Brothers Band founders, and with that legendary band over and done with, Devon sensed that an Allman/Betts collaboration would be healing for everyone.

“It just struck me that it was time for Duane and me to work together, which we’d been talking about for a few years,” Allman says. “I knew it would make the fans happy and I thought it would be good for us as well.”

Allman and Betts have now toured the world together for a year, with Betts opening and Allman following before coming together for a third set that’s heavy on Allman Brothers Band tunes.

“It’s been quite a trip to be on stage playing my dad’s guitar, with his wallet in my pocket playing his songs for his fans,” Allman says. “Sometimes it’s difficult but it’s also healing and my dad’s fans have given me and my family so much support.”

Gregg Allman and Dickey Betts never played together after Betts’ acrimonious 2000 split with the Allman Brothers Band, and the sight of an Allman and a Betts onstage together has warmed the hearts of many, while also opening them up to hear Duane and Devon’s own music. Allman has released five albums, and Betts just put out his debut, Sketches of American Music.

“This tour has been about balancing our own music with our fathers’ catalogs,” says Betts, who has also been touring with Dickey, who recently emerged from a four-year retirement.

This second-generation Betts/Allman collaboration is just beginning. The two have been writing together for an album they hope to release early next year. “We really love what we’re doing and we really feel we can do something special,” Betts says. “It has to evolve, and we see a lot of possibilities together.”