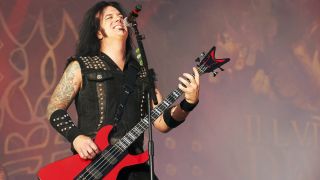 When I was a teenager in the 70s, radio was much more diverse than it is today. What was considered pop music might be Carl Douglas’s Kung Fu Fighting or Black Sabbath’s Paranoid, and rock ’n’ roll radio had a much broader palette than it does today, when everything is so very calculated.

The DJs would be actual disc jockeys who would play records. Musically speaking, bands such as KISS, Led Zeppelin, Deep Purple and the like cemented the foundations of hard rock, whose offspring would ultimately evolve into metal. It was a great time, culturally speaking.

My voice went low at a really early age, maybe even when I was seven or eight. My parents used to listen to a group called the Kingston Trio, who played a folksy, calypso style of music, with three singers who would do almost a barbershop trio.

They’d sing low and high, similar to a gospel style. I would memorize all the parts, but I always liked the bass parts best. It was comfortable and natural for me, because I heard bass.

When you listened to Black Sabbath, or Alice Cooper’s original band, or Grand Funk Railroad, with the way those records were mixed in the 70s, you really heard the bass. It was sometimes the loudest thing on the record. It just sounded really good to me. It was a very organic thing, and ultimately I feel at home with bass because it’s part of the resonance of my being.

Back then, the charts were full of punk rock, which I liked, and disco music, which I didn’t. I liked a little bit of funk – the Ohio Players was a band that I enjoyed, with good bass and interesting beats. Blues used to be so good, but we’ve lost a lot of the greats. BB King was a tremendous, soulful, spiritual player.

I don’t know what happened to high-quality soul music, although I do like R&B singers like Erykah Badu, who has a very passionate, instinctual voice. The Blues Brothers movie got me into a lot of this music. In punk rock, I liked the Misfits and the hardcore DC stuff.

I loved Black Flag, and Minor Threat, and Iron Cross. I liked the energy. It wasn’t so much about the musicianship per se but about the attitude. It seemed that all of the so-called great musicians didn’t have that energy. I was always trying to find something that I didn’t know.

I’ve tried to get metal people to understand the energy of punk, but usually they’d say that it just sounded like a bunch of noise. Soon I started learning to play music myself. I started on upright bass in the school orchestra in third grade, when I was nine years old. I liked it because you could get out of class to do the music lessons, and also because there was a girl that I liked in the orchestra, so I decided to do it, too.

They needed a bass player, but I didn’t yet take it seriously; that instrument was a beast to get on and off the school bus, and what they were teaching us to play was not the kind of music that I was interested in. Still, my upright bass studies lasted a while, and they ended up being even more interesting to me because I was always auditioning for parts.

Schools had pretty good music programs back in the day, and they’d do recitals where there would be a theme that the music teacher would come up with. We’d all find our spot, and those who cared about music were encouraged to be a part of it. I was a singer, too, and I always tried out for vocal solo parts.

I was probably the best candidate for it, but because of my disciplinary record they would often overlook me and choose someone else – even though I did a better job during auditions, and I knew it.

My mom tells me that I decided to become a performer when I was three years old. ‘All you used to say was that you wanted to have a truck, and then you’d put a band in it, and you’d go around and play songs,’ she once told me. Other kids wanted to be a fireman or a policeman. Not me!