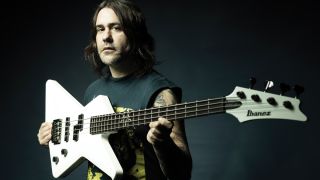 The new wave of American heavy metal has produced one of the most important bands to shape the modern landscape, combining hardcore punk with headbanging riffs since 1999. It can only be the Massachusetts five-piece Killswitch Engage, consisting of Jesse Leach on vocals, guitarists Adam Dutkiewicz and Joel Stroetzel, bassist Mike D’Antonio and drummer Justin Foley.

This year marks the release of the quintet’s eighth album, Atonement, celebrated by fans and critics alike all over the world. As the band pack more heaviness into their records than ever these days, it is a challenge for D’Antonio to get the lower frequencies heard among all that downtuned madness.

With modern metal’s emphasis on ripping six-strings, do metal bassists have it harder these days, we ask?

“I think metal may be one of the few genres where bass isn’t considered a main instrument,” he says. “You think funk, jazz, fusion or rock, and the bass is ridiculously loud. It’s different from band to band, but I think it’s because metal is supposed to be sterile, dead and cold, and bass is warm. That’s what pedals are for, I suppose!”

How does he describe his own tone these days? “I would say it’s probably the angriest and most attacking bass tone I have ever gotten. It’s thanks to the Steve Harris Seymour Duncan pickup I have now in my signature Ibanez bass, the MDB4. I use a lot less midrange these days just so I can get that really sick, empty, low funk sound. It’s got punch and lots of treble but not a ton of midrange, just lots of growl and snarl like a really pissed-off, aggressive teenager.”

When it comes to gear, we’re not sure if we’ve ever come across a bigger bromance than the one between D’Antonio and his trusty Ibanez. Having found his four-string soulmate, is this a match for life, we wonder?

“I love Ibanez - they’ve just been so good to me,” he says. “I’m a loyal guy and they’ve been with me for at least 15 years. They’ve been nothing but respectful and awesome, and anything I need they will send it out. I could never be seen with another bass than my MDB4.

“I love it so much, and it’s not all that awkward to play either,” he adds. “I tried the Iceman model for a while, but it’s so top-heavy that if you let it go the head would just fall to the ground. So I went for the Destroyer model instead, and it’s balanced out so well. It’s lighter than all the other basses I have. It’s probably the most comfortable bass I’ve ever used.”

As D’Antonio wants to keep that clarity in his tone, playing with fingers isn’t really a practical option for him. He explains: “When I first started on bass, I immediately used a pick. It was a good thing too, because it’s great for recording. I’m adequate with my fingers if I have to finish up a song and go into another one, but it’s not my first choice. Pick is generally the way for me.”

Of all the bass parts he’s recorded for Killswitch, one stands out for him: “I love the chorus of Just Barely Breathing, ” he says. “It takes a bit to get to it, but it is so much fun to play live; it’s simple and to the point. I get particularly pumped when I play that riff, although sometimes I overthink it because I’m excited and just forget how to play it.

"If something like that happens to me, I’ll get Adam and Joel giving me evils on stage, and then afterwards they’ll both laugh at me. I try to play as best I can every night so they don’t make fun of me!”