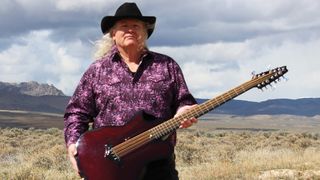 How did you get into 12-string basses, Mark?

"I’ve been playing in various rock and country bands for 40 years, and I’ve done well over 2000 gigs. I first got into these basses back in 1987, when I picked up a fretless Rickenbacker eight-string. That’s the only fretless eight that Rickenbacker has ever built, according to the documentation.

"I got into it because I was living in Missoula, Montana, which is a college town with a great music scene. There weren’t enough bands to go round, so I ended up playing in 14 different groups over a three-year period.

"A lot of those were three-piece rock bands, and although I love that format, the problem is that the sound drops out when the guitarist starts playing a solo. The eight-string was a solution because it has a bigger sound.

A lot of us are a bit intimidated by these things. Should we be?

"There’s definitely an intimidation factor! [laughs] I demonstrate Musicvox instruments at NAMM Shows, and a lot of male bassists are afraid to pick them up because they look scary. Women are not afraid to play them, for some reason: They come up, grab them and say ‘This is cool.' I don’t know why there’s that difference.

"But the intimidation also extends to the other musicians in your band. If you’re with a guitarist who’s not real secure about himself, or has an overactive ego, they don’t want to have to compete with this great big instrument, which sounds monstrous.

"That’s one of the reasons, I think, why you don’t see more twelves around, because guitarists think that it won’t fit into their style of music."

Are they wrong to think that?

"What I’ve discovered is that a 12-string bass actually enhances the guitar parts more than guitarists realize. I remember playing a gig where I played a four-string instead of my usual twelve, and people came up to the guitarist afterwards and said, ‘What’s wrong? Your guitar didn’t sound as full tonight.'

"This was because they were used to hearing the high strings on the 12-string bass, and assuming they were guitar strings.

"I brought it back the following night - and the guitarist was complimented on his sound."

What are the challenges that come with these basses?

"First off, they’re hard to find. There may be 5000 of these at most, worldwide. Only a handful of companies build them on a production basis, among them Dean, Musicvox and Waterstone.

"Then there’s the string tension, which is high because most of them have a 34” scale. The triple strings can be a little tough to play, especially if the bass isn’t set up with a real low action. They take some getting used to, because you need some extra finger strength."

I assume it’s best to play them with a pick?

"There are some fingerstyle players out there, such as Chip Z’Nuff of Enuff Z’Nuff, but I prefer to play with a pick, because I get much better definition out of the sound that way.

"I started out as a finger player, and I’m not as fast with a pick, but the sound is better."

Is it important to hit all three strings in each course every time you play a note?

"That is very tough to do, because you have different gauges of strings grouped together. If you play downstrokes, you’re primarily accentuating the high octave strings, whereas upstrokes hit the low strings first, so you get completely different sounds in each direction.

"I prefer to string my basses inverted, in other words with the fundamental strings on top. That enables you to play more chords. Typically, I play either five or eight strings at a time, even though they’re grouped in threes."

Would you use alternate tunings?

"You can absolutely do that. I have one with a 35” scale, so the string tension is off the scale. For that reason I tune it B E A D and it sounds like the devil himself, believe me!

"Dug Pinnick of Kings X drops everything down to D, and Tom Petersson of Cheap Trick has a bass with a low G."

Presumably they take a while to tune up?

"True, but most of these basses stay in tune really well. It does take me about two hours to change a set of strings, but an hour of that is getting the intonation right.

"The strange thing is that you don’t necessarily want these basses to be perfectly in tune. You want your fundamentals to be in tune, of course, but if you detune the octaves a tiny bit, you get a chorus effect that really thickens up the sound. It actually sounds bigger."

So these basses aren’t particularly difficult to manage, then?

"Absolutely. A set of strings only costs $25 to $30 and I just use a regular amp. A 12” speaker works great with these basses. You can thicken up the sound with a stompbox of some kind, but it’s not essential: The PA will replicate the sound pretty well.

"You know, it’s all about your mindset. It’s gonna take some work to get your finger strength up, and you’ll have to get used to some ribbing from your bandmates who aren’t used to the sound. But they’ll come around in the end!"