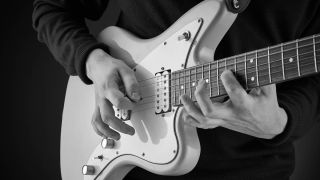 Okay, stick with us here! We all know that scales aren’t that exciting, but the CAGED system will transform the way you play.

You already know open C, A, G, E and D chords, right? The CAGED system plots these beginner-friendly shapes across the fretboard as barre chords, helping you play all the way up and down the neck.

To transfer this to lead guitar, you’ll be linking a scale with each chord, and that’s not as hard as it sounds. The chords are relatively easy and the scales have similar finger patterns, so you’ll soon be blazing around the fretboard.

Play an open C shape, move it up two frets and make sure to use a barre. You’ll get this D chord.

This is the D major scale. It’s so similar to the chord shape that you can jam around both.

Another D, but this time our barre chord is based on an open A chord shape.

Just like before, the scale and chord are similar enough that both lead and rhythm are on the cards.

Okay, this chord is a toughie but it doesn’t matter! Especially if you’re thinking about a lead lick.

Again, the scale and the chord share notes. Try making up a lick using notes from both shapes.

Hopefully you’re starting to get the idea. Here’s another D barre chord but using an E shape.

Are you getting it yet? The chords are easy to remember, so hook your scale-based licks around them.

Here’s the fifth and final one - a familiar open D shape, but all the way up at 12th position.

Once again, both chord and scale use similar finger patterns. Try jamming with both.

If you still don’t quite get why the CAGED system is so transformative, take a look at this lick. The backing chops away on a D chord. It could get dull, but the lead guitar covers the whole fretboard, expanding on the scale shapes we’ve looked at. Like we say, link a scale with a chord you’re soloing over and you’ll never run out of licks!