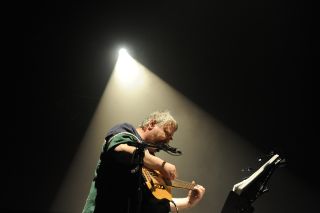 Daniel Johnston, the singer-songwriter whose emotionally bare lo-fi homemade recordings inspired artists like Kurt Cobain and Tom Waits, died on September 10 at the age of 58. The suspected cause of death is a heart attack.

His family said in a statement: “Daniel was a singer, songwriter, an artist and a friend to all. Although he struggled with mental health issues for much of his adult life, Daniel triumphed over his illness through his prolific output of art and songs. He inspired countless fans, artists, and songwriters with his message that no matter how dark the day, ‘the sun shines down on me’ and ‘true love will find you in the end.'”

Johnston was born in Sacramento, California and raised in West Virginia. He recorded his first album, Songs of Pain, on a cassette deck in his parents’ basement in West Virginia in 1980 and 1981.

Johnston’s sixth cassette, 1983’s Hi, How Are You, was the first to feature him playing guitar in addition to piano and chord organ. Johnston has claimed he was experiencing a nervous breakdown during the making of the record.

Johnston’s eleventh album, 1990, featured Sonic Youth’s Lee Ranaldo and Steve Shelley. That same year he was involuntarily committed to a mental hospital after an earlier diagnosis of schizophrenia.

Not long after, mainstream interest in Johnston’s music was sparked when Cobain was photographed wearing a t-shirt emblazoned with the Hi, How Are You cover art.

Major labels like Atlantic and Elektra made bids to sign the outsider artist, with Johnson reportedly going with Atlantic due to his belief that Elektra artists Metallica were possessed by Satan.

Johnston’s only major label album, 1994’s Paul Leary-produced Fun, was released while he was undergoing treatment in a mental hospital. The album was a commercial failure and Johnston was dropped from the label.

Johnston’s base of admirers only continued to grow. In 2004, he released The Late Great Daniel Johnston: Discovered Covered, which featured covers of his songs by artists like Waits, Beck, Flaming Lips, TV on the Radio, Eels, Bright Eyes, Death Cab for Cutie and more.

The 2005 documentary The Devil and Daniel Johnston, which examined his battles with schizophrenia and manic depression, won the Documentary Directing award at the Sundance Film Festival.

More recently, Johnston embarked on a five-date North American tour that featured artists like Wilco’s Jeff Tweedy and members of Built to Spill and Fugazi serving as his backing band at various stops.

“Daniel has managed to create in spite of his mental illness, not because of it.” Tweedy told the New York Times that year. “He’s been honest in his portrayal of what he’s been struggling with without overtly drawing attention to it.”