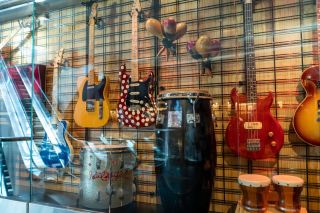 The Garage is the Rock & Roll Hall of Fame’s first-ever dedicated space for visitors to pick up instruments and make music—and do it in an environment designed to recreate the experience many of us had while playing in our first bands.

But while you and your childhood friends may have spent countless hours in a garage bashing out “Smoke On the Water” or “Free Bird,” chances are you probably didn’t do it surrounded by an incredible array of artist-played gear from legendary Rock Hall Inductees.

At the Garage Gear exhibit, visitors can take a break from making music and check out iconic and historic music-making items from the Museum’s collection. Which means the Garage is more than a place for fans to revisit their own musical youth by grabbing a guitar or microphone and rocking out with abandon—it’s also a spot to take a trip back in time to learn about rock history and view the actual tools of the trade close up, in a constantly changing display.

And what a display it is. Some of the items currently exhibited in the Garage are true historical artifacts, such as Les Paul’s “The Plank” guitar from 1940. Paul’s name, of course, would later become most associated with the Gibson electric six-string that, in the hands of artists like Jimmy Page, Eric Clapton and Slash, became a celebrated instrument of rock. But The Plank, which the famed musician and inventor constructed from 2 x 4 wooden boards, screws, a door hinge, a spring and two guitar strings, represents one of Paul’s earliest attempts at building a solid-body stringed instrument.

Another standout design is Eddie Van Halen’s 1996 Peavey Wolfgang guitar, hand-built and delivered to the six-string legend at his home recording studio, and which Eddie played and critiqued in the development of what would become his signature production-line model.

Additional showcased instruments include a Fender Telecaster played in the studio by artists ranging from B.B. King to Jeff Beck to the Smiths’ Johnny Marr, the circa 1970 Gibson Les Paul Custom that James Gang and Eagles great Joe Walsh used to write his 1973 solo smash, “Rocky Mountain Way,” a red-and-white polka-dot 1996 Fender Custom Shop Stratocaster custom-made for—and played by—Buddy Guy, and an Aria bass used by the Pixies’ Kim Deal onstage, in the studio and in the video for the band’s classic 1989 song, “Monkey Gone to Heaven.”

Inspiration across the generations

These one-of-a-kind instruments are genuine pieces of rock history come to life. And they serve as an inspiring backdrop for Rock Hall visitors creating their own unforgettable musical moments in the Garage.

“What we’re doing here at the Rock & Roll Hall of Fame,” says Darryl “DMC” McDaniels, a 2009 Inductee with Run DMC, “is honoring the birthplace of the greatness not just of the creators, but those that hear, see and experience the beauty of the soul and spirit of rock & roll.”

That greatness is alive in each and every one-of-a-kind instrument on display in the Garage Gear exhibit, and is ready to be seen, heard and experienced by rock fans of every generation.