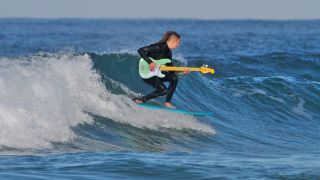 Here at Guitar World we struggle with patting our heads and rubbing our stomachs at the same time. So we were mightily impressed by this video of UK-based musician Jonny Rubin, a k a Dr. Funk, surfing while playing his bass guitar.

"I had to paddle with it on my back, but had been thinking all week about how I would swing it around and keep my balance while on the wave,” he told the BBC.

"But the conditions were perfect and it all fitted into place."

British builder Cassidy Guitars supplied Rubin with a new bass to achieve the surfing feat. He then had to seal the instrument using Vaseline and silicone.

"I don't know if it will ever work again," Rubin said.

Whether or not it does, he’ll have the above killer pic, captured by photographer Dan Sedgwick, to marvel at for the rest of his days.

To check out Dr. Funk in action – both on the waves and also on the bass – head over to his official YouTube channel.

As for what’s next? The BBC reports that Rubin plans to go stand-up paddle boarding, using the bass as a paddle. Let’s hope Mr Sedgwick has his camera ready.