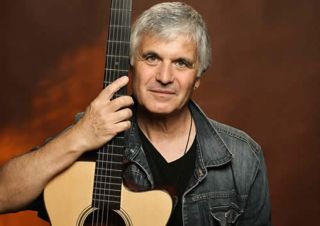 Explaining the album’s concept, Juber in a statement: “This album differs from my other recordings in that it’s based on a historical perspective of what became known in the 20th Century as fingerstyle guitar. While I was doing some events with the C.F. Martin Company, as well as working with various school music programs, I found myself delving into the history of the guitar, from the Renaissance period onward. The record started out as a research project that evolved into a transcription music book, and then it took on its own life. Finally, I said to myself, ‘Hey, this might make a cool album!’”

The 20 tracks on Touchstones include the first published Renaissance lute, vihuela and guitar pieces, then proceeds with Baroque, Classical and Romantic musical eras, before transitioning into the American parlor guitar repertoire, with the influential “Spanish Fandango.”

“It’s definitely ‘guitar-ology,’ for lack of a better term,” said Juber, who has also played with Paul McCartney in Wings. “You’re hearing one person on a steel-string guitar playing music that, in its own era, represented the sounds of the times.”