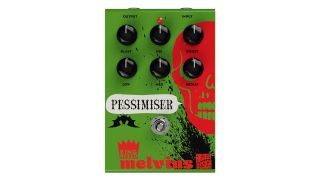 The new unit, which follows up the pair's two-knob Compressimiser, promises to capture the unique distortion tones spanning Osborne’s entire career, according to Hilbish.

Which means we get a Boost knob that runs from light overdrive to full-on distortion to over-the-top fuzz, a Mix knob that allows for blending in a clean signal, and a three-band active EQ with low, medium and high (or, as Hilbish puts it, high AF) controls.

As for the enticingly named Blast knob? That one, says Hilbish, “controls your volume, dipshit.”

The Pessimer, with artwork by graphic designer Mackie Osborne, is available for $225. To pick one up, buzz on over to Hilbish Designs.