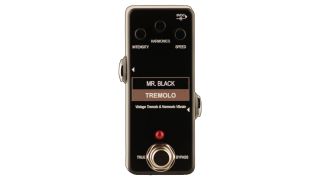 Mr. Black has released the Mini Tremolo, the latest edition to its growing line of mini effect pedals.

The new unit offers up both vintage bias-modulating tremolo and harmonic vibrato, all in a ridiculously small enclosure.

The simple three-knob layout boasts controls for intensity, speed and harmonics; crank the last of these and you enter harmonic vibrato land, which splits the signal into two voices and then modulates each one.

The result, according to Mr. Black, is “an amazing swirly pulse which sits somewhere between tremolo and Uni-Vibe/phaser territory.”

The Mini Tremolo is available for just $99.95. Pre-orders are up now at Mr. Black.