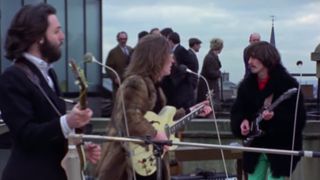 We all know that intra-band relations were far from rosy in the Beatles camp by the time they were recording Let It Be in 1969.

From a guitar perspective, at least, this led to one of the more interesting moments in the band’s late period, with John Lennon, traditionally the band’s rhythm guitarist, taking over the lead slot from George Harrison for standout cut Get Back.

As revisited in an article on Cheatsheet, Harrison had walked out of the studio. Rather than wait around for him to come back, Lennon merely played the lead guitar, including the solo, himself.

You can see John do as much when the Fab Four convened to play the song, along with a few others including Dig a Pony and Don't Let Me Down, live on the rooftop of Apple Records on the afternoon of January 30, 1969 – their final performance ever.

But John, for his part, wasn’t shy about boasting of his, we’ll admit, rather impressive handiwork on the song.

When Get Back was released as a single, McCartney wrote a little something for the press advertisements, which included the following joke-y (we think?) snippet:

“We were sitting in the studio and we made it up out of thin air... we started to write words there and then... when we finished it, we recorded it at Apple Studios and made it into a song to roller-coast by.