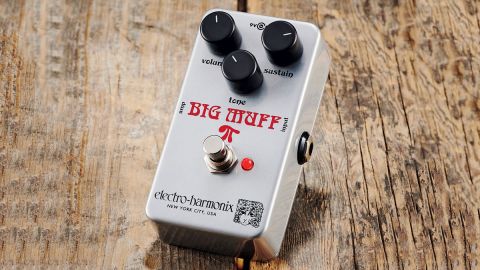 It’s excellent news that this particular flavor of Big Muff is freely available once more - and it sounds every bit as good as it did back in 1973.

So, which is the most desired Big Muff of them all? There have been many variations over the years, but a lot of Muff aficionados have a soft spot for the V2 Muff produced for a few years from 1973 and known as the ‘Ram’s Head’ because of that bizarre little face on the front.

The popularity may also have something to do with the fact that it’s the model most associated with David Gilmour.

Now in its nano range of Big Muff fuzz pedal reissues (that also includes the V1 Triangle Muff, Op-Amp Big Muff and Green Russian), Electro-Harmonix has launched the Ram’s Head Big Muff Pi, said to be a reproduction of the ‘violet’ version - the most common revision of Ram’s Head-period circuitry as first seen in ’73 models with violet silk-screened graphics, although it is also found in pedals with other colors.

EHX has refined the new model’s circuitry with close reference to some vintage models, and A/B’ing it against our own ’73 vintage Ram’s Head confirms they’ve nailed it. The usual Big Muff range is all here: the Sustain knob starts out at medium-gain overdrive, but soon transitions into saturated fuzzy sustain that just goes on and on, blooming into harmonic feedback as you hold a note.

Tonally, there’s less bottom-end than in a lot of other Big Muffs; here it’s tighter and more controlled. The midrange scoop is there, but the pedal’s overall balance of frequencies seems just right, yielding a lovely degree of string articulation. All can be tailored with the wide-ranging tone knob - rolled back for smooth liquid sustain or rolled forward for crispier, more cutting top-end.

Ultimately, a Big Muff is a Big Muff and any particular version is going to be in the ballpark, but to aficionados it’s all about the subtle differences and this one has pedigree. If Comfortably Numb floats your boat, you’re a Dinosaur Jr fan or you want to cop Ernie Isley’s That Lady tone, then a Ram’s Head is likely to be your preferred variation.

Hand-built in the UK, this inspired-by version of the Ram’s Head Big Muff from Expresso FX increases the versatility that’s available by adding two extra toggle switches to the pedal for boosting the mid and bass frequencies.

One for fans of Mr Gilmour, this pedal puts two classic circuits into one unit: there’s a ‘Ram’s Head Muff’ channel, followed by one that’s based on a Colorsound Power Boost, favored by the Floyd man as a post-Muff tone sweetener.

For those of you who like to build your own pedals, BYOC has the Ram’s Head-style Large Beaver, which has the added flexibility of a tone bypass and a scooped/flat/hump mids selector switch. There’s also a more diminutive L’il Beaver.