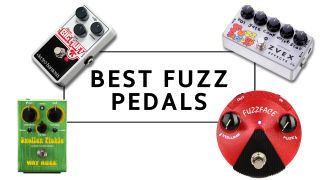 Along with overdrive and distortion, fuzz is by far the most common electric guitar effect - and also one of the most diverse - and in this best fuzz pedals guide we’re going to help you find the right one for the sound you’re after.

The first fuzzes were created and used early in the history of rock n' roll, unlike say, delay, which didn't appear in earnest until the '70s. These fuzzes were often home-brewed or erratic concoctions, designed for pure noise, and it was a while before more stable designs like the Big Muff, Tonebender and Fuzz Face appeared – although the early Fuzz Faces were notorious for variation between units.

It’s for this reason that Jimi Hendrix bought them by the bucketload, carefully auditioning each pedal until he found the one that suited his sound. They're not for everyone, but if what you want is some rock gnar, then look no further than a fuzz.

What is the best fuzz pedal?

With its balance of seriously gnarly fuzz on tap, as well as the ability to be dialed back to suit many styles of playing, the Big Muff has to be our recommendation – doubly so as it's pretty affordable for most players. Specifically, though, we are big fans of the op-amp reissue, which until recently was only available via boutique builders, DIY kits, or trading your right arm for an original. This is the best fuzz pedal for that classic Smashing Pumpkins sound and beyond.

If you want to get wilder, then the original madcap fuzz is probably what you seek. Used by Robert Fripp, Matt Bellamy, Rivers Cuomo, Buckethead, Stephen Carpenter, Trent Reznor, St. Vincent, Jack White and J. Mascis, you're in good company with the ZVex Fuzz Factory on your pedalboard. The controls may not really describe what they do, and yes, it might sometimes pick up radio transmissions, but that's all part of the charm of this insane, inspirationally weird fuzz. Your playing will never be the same again.

Of course, there's some crossover. The original ProCo RAT's signature clipping sound was largely its LM308 op-amp being driven into nearly triangle-wave clipping. The fact it had hard clipping diodes after the amp stage was more important to the later models that used a different op-amp.

On the other side, the Big Muff gets its signature sound mainly due to two soft-clipping amplification stages, which in terms of topology makes it closer to a drive, even as its square-wave signal screams "fuzz!"

A lot of things change the tone of a fuzz. There's the obvious stuff, like the EQ profile of any components in the signal path, and whether there's an EQ control on the pedal itself. The type of transistors used matters too, with germanium transistors being heat-sensitive, unpredictable, 'warm', 'wooly' and 'spluttery', while silicon transistors are more predictable in mass-manufacture, but a bit 'colder' and 'sharper'.

Finally, there's the intent of a fuzz to consider – is it supposed to sound smooth, or like a hole being torn in a partition wall? Where an op-amp based circuit tends to have a limited number of designs that will work, transistors are more lenient – at least in the sense that they will often make noise in unpredictable ways even when not used in the way the manufacturers intended.

This makes fuzzes a uniquely accessible area of pedal design, and it's where most boutique builders got their start, from the noisemakers at Death By Audio to the digital whizzes at Old Blood Noise Endeavors.

The best fuzz pedals you can buy today

Although many household names have used the Big Muff over the years, perhaps the band most associated with the pedal is Smashing Pumpkins. On their 1993 classic Siamese Dream, they gatecrashed the grunge party with their 'guitar army', and had legions of guitarists scratching their heads as to how to make that sound.

Of course, part of the answer was 'a lot of overdubs', but when the word got out that Billy Corgan had used a Big Muff on the record, the pedal became hugely sought after overnight. Unfortunately for wannabe sound-a-likes, Billy's Big Muff was actually an unusual vintage op-amp version.

Due to availability of parts, the design of the Big Muff shifted over time, and the op-amp version, which was a completely different circuit from the quad-transistor original Big Muff, was comparatively rare. Billy had just gotten lucky that he picked up that specific version from a pawn shop.

Until recently your only option was a boutique clone, rare original, or building your own, but luckily EHX recently reissued it, so you too can bask in its fuzzy glory.

A great fuzz option for the psych players

Using a combination of germanium transistors, feedback loops and controls that allow the user to mis-bias the circuit inside, the Fuzz Factory is versatile in a way that most pedals simply aren't. Want to reduce the input voltage so the pedal breaks up into oscillation? Go right ahead. Feed the output from one block back into itself? Sure thing!

For this reason, it was a breath of fresh air when released, and gave Z.Vex the foundations on which to build an empire of the unusual.

In terms of sounds, it's in the Fuzz Face family tree, so it's possible with some tweaking to get a quite sedate blues lead tone out of the pedal, but of course it shines when it's a screaming ice-pick of velcro-fuzz mayhem.

Even now, when there's seemingly more pedal companies out there with each passing day, there's something simple, elegant, and thrillingly iconoclastic about the humble Fuzz Factory.

A more versatile Big Muff-style fuzz
More compact than the NYC muff
If you want an EHX original
If you want a Russian, Triangle or Op-amp Muff

Despite having an IC on the board instead of discrete transistors, the Swollen Pickle's IC is just a transistor package, making it a variant of the regular Big Muff instead of the op-amp Big Muff, as some assume.

With quality components, a buttery-smooth footswitch and controls for scooping the mids and changing the voicing, as well as a couple of internal trimpots for further tweaking, the Swollen Pickle offers more tone tweaking options than almost any Big Muff-like pedal on the market.

The original classic fuzz pedal in a smaller form

Though the internals have changed drastically over time, the wedge-shaped silver NYC Big Muff is the most iconic and best fuzz pedal that EHX have produced. It's now available in a Nano enclosure.

Chances are you've heard this on countless recordings, and if you're looking for a huge wall-of-sound fuzz, then it's probably the Big Muff that you're thinking of.

The only thing to be aware of is that the Big Muff has been in production since the end of the '60s, so knowing exactly which Muff sound you're after - Russian, Triangle, Op-amp - will help you in getting the exact sound in your head.

However, if you're not sure, then you can't go far wrong with the NYC classic.

Go back to where it all started

Although it's been out of production at various points, the distinctive 'smiley face' Fuzz Face pedal has been in production since the sixties. It's sought after for its responsiveness to the guitar volume knob, and ability to go from mild, bluesy grit to all-out fuzz.

The brainchild of Oliver Ackermann from noise-rock band A Place To Bury Strangers, Death By Audio make insane, off-the-wall pedals, from mind-bending reverbs and delays to oscillating fuzzes like this, which is how they made their name.

The Supersonic Fuzz Gun is their most recognizable and best fuzz pedal, and epitomizes the early DBA circuit-design strategy of 'throw parts at a breadboard until it sounds crazy.' Like the Fuzz Factory, the labels on the controls only bear a slight relation to the effect they have on the sound of the pedal.

At least half the joy of the Supersonic Fuzz Gun is that it sounds completely unlike something a large manufacturer would make. It's dirty, it's punk, and its design is more about the artistic intent of the creator than anything as dull as engineering rules.

For a fuzz tone that'll stay with you

A spin-off of a pedal called the Gatekeeper that Brady Smith made under the name Little Axe Effects before founding OBNE, the Haunt was one of their first creations. A highly tweakable and somewhat extreme fuzz, they're relatively secretive about the circuit topology.

It's transistor-based, which probably puts it somewhere in the extended family tree of the Big Muff, but that's less important than the sounds – everything from more middle-of the road fuzz to ripping velcro and gated sputter. If you want a pedal that's weird, but not DBA levels of weird, then the Haunt could well be the fuzz for you.

A fuzz pedal that people will ask about at every gig

Besides looking cool, the joysticks are useful features if you're using the Janus in the studio, or - shock horror - on a table, for synthesizers.

The fuzz side is essentially the Walrus Jupiter, a fuzz pedal based on the Big Muff with a series of mods to the clipping options and bass. Apart from the artwork being cool, the Jupiter isn't the most exciting fuzz around, but in the Janus it's a different, radically more expressive beast.