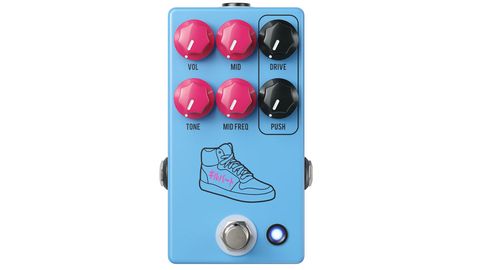 The JHS Paul Gilbert PG-14 is ideal for players who want expressive, dynamic lead tones and the sound and feel of a fully cranked amp at lower volumes while being flexible enough to dial in their own individual tones that sound like nobody else.

Overdrive and distortion pedals are the guitar world’s equivalent of seasonings and spices in the culinary realm.

Some of these effects are like salt or pepper (such as clean boosts and Tube Screamer-style pedals, respectively) that players will want to use often or always, but others can be like the bolder flavors that you may not want to use all the time, but when they’re needed nothing is better.

The JHS Paul Gilbert PG-14 falls more toward the latter category and to me is the sonic equivalent of Japanese shichimi togarashi – a complex blend of flavors that makes its presence known yet perfectly complements a wide variety of foundations to make them even more tasty.

The JHS PG-14 provides six control knobs arranged in two rows of three, with four hot pink knobs at the left and center for volume, tone, mid and mid frequency and two black knobs on the right for drive and push. The volume, drive and tone controls are self-explanatory, providing control of output level, overdrive and overall warmth or brightness.

The pair of controls for the mid EQ section is a more uncommon semi-parametric configuration, with the mid knob controlling the gain of the mid frequency setting, which provides a sweepable peak range from 400Hz to 7.5kHz.

While the controls of the JHS PG-14 are pretty easy to understand, this is not a dumbed-down “set everything to 11 and go” distortion box. Getting the best tones requires a good amount of tweaking and careful listening, but the rewards are well worth the extra effort.

Because the pedal is capable of delivering generous amounts of gain, it generally sounds best with an amp dialed in to a clean or just slightly overdriven tone (the latter was my preference).

The settings of the push and drive controls can also affect the overall tone, with higher settings (12 o’clock and above) on the push control making the bass bigger but also looser.

By design, the effect’s treble frequencies are tamed so the tone never gets too thin or piercing, which also consistently keeps the midrange fat and prominent no matter where the mid knobs are set.

Thanks to the overall richness and body of the pedal’s inherent tone, the PG-14 sounds best for lead/solo applications where guitarists want single notes to blast through the mix. The pedal is also great for players who want the sound and feel of a fully cranked amp at more manageable volume levels.

It works equally well with humbucking or single-coil and passive or active pickups, and it can even be used to fatten up the sound of single-coil pickups for pseudo-humbucking tones. The drive control delivers responsive dynamics up to about the 3 o’clock setting with just a hint of compression.

Just like a dash of shichimi togarashi, the Paul Gilbert PG-14 can make a guitar’s tone more spicy, rich and crunchy when paired with a wide variety of guitars and amps, and when dialed in just right, the tone can be downright mouthwatering.