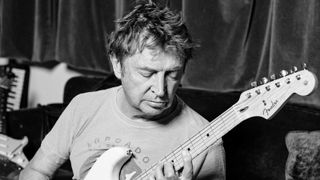 His inimitable, atmospheric guitar work with the Police helped define the sound of popular music in the Seventies and Eighties, while his endlessly adventurous, eclectic solo work has constantly eschewed convention and artistic boundaries. But what Guitar World readers really want to know is…

I read that you once Jammed with Jimi Hendrix in a studio, with you on guitar and him on bass. what was that like? —Colin Smith

I was in the same circle, had the same manager as Jimi Hendrix at that point, when I was in the Soft Machine. We all lived in Laurel Canyon [in Los Angeles] and Jimi was going to play at TTG Studios. I had met him a few times, and I went with a guy I was working with. We walked into the control room of the studio, and there he was. He was leaning up against the window, playing full on — at fantastic volume — dressed as he was in those days, with a feather in his hat and all the rest of it.

As soon as he stopped, he walked into the control room and we all said hello. I was also friends with Mitch Mitchell, his drummer, and I walked out into the studio and picked up a guitar and started jamming with Mitch. So we were just jamming along, and Jimi came out, picked up the bass and started playing bass with me. We went on for a while like that, then he decided he had to play lead guitar [laughs]. It apparently was recorded, and you can find it on the Internet somewhere.

I love your Thelonious Monk and Charles Mingus tribute albums [1999’s Green Chimneys: The Music of Thelonious Monk and 2000’s Peggy’s Blue Skylight.] How did you go about transcribing and arranging such intricate, complex music for guitar? —Greta Willis

It was a challenge. I’d grown up with the music of Monk; I was sort of a jazzhead when I was a teenager, that’s where I started. When I was 16, I went to London and saw Monk in a big jazz show. It had Dizzy Gillespie, Roy Eldridge, all these great American jazz stars. When he came out and played, I thought that this was the essence of America, this was what jazz really is. I was so taken with it and was always a fan after that.

Much later in life, post-Police, I started making a lot of solo records, and it came to me that I should do an all-Monk album. The challenge was to get it all onto the guitar, make it sound good — like it had been written for the guitar — and, obviously, to retain the Monk signature. I spent about six months on it. I must’ve learned every Monk tune there was. I really buried myself in it for a period before I started recording, which was wonderful because there’s so much to learn from the music itself. The compositions are fantastic, really interesting, harmonically. It was a great lesson, just studying that music and learning how to play it all. I’m really glad I did it. Of course, it inspired me to go on and do the Mingus record, which was a really fantastic experience. I was going to do a third one, which I never quite got around to. I thought I’d do Miles [Davis] after that, so I’d have Monk, Mingus and Miles. Maybe I’ll still do it! [laughs]

The Police got their start during the height of the English punk scene. As a veteran guitarist already, what was it like to suddenly be thrust into a scene where musical simplicity was all the rage? —Ruben Carpenter

Well, you could call it musical ignorance, maybe. I don’t think it was musical simplicity. I mean, there are a lot of ways to look at that. It was a fantastic, wonderful moment in London — hi-color, the U.K. at its weirdest and quirkiest best. That look, the Sex Pistols, the Slits, it was such a wonderful visual scene as well. Obviously, the whole credo was that you don’t have to be able to play music to be in a band, you don’t have to have musical talent. It was a scene, and there was sort of a grim reality to it. It pretty much turned the music industry as it was — which needed it anyway — upside down. Of course, you had really bloated corporate rock bands at that point, and punk came in and it was the absolute polar opposite of all that bullshit. Basically, within a few weeks — with punk really raging in the country — if you weren’t in a punk band, you weren’t going to work. The Police started in the middle of that scene, and none of us were “authentic” punks, we just weren’t. As were a lot of the so-called “punks” — they were middle-class, educated people who put on the uniform! [laughs] So there was a lot of bullshit with it, and there was some genuine stuff, but it was an exciting moment, and it was kind of fun to be around in a way, but it’s not really [musically] where the Police started.

We were kind of a fake punk band, and once we really started to play together seriously — to try to be a really good band and really rehearse — a genuine, authentic musicality came out, which obviously wasn’t really a punk sensibility, and the rest is history.

You’ve said that your Echoplex pedal played a sizable role in shaping the Police’s sound early on. What else was in your rig when the band was first starting out? —Ed Blackmore

Not much, really. When we started, all I had was a Fender Twin — with bass, treble and middle — because we had no money. As we went on, I managed to acquire more things, but the big move was getting the Echoplex, because I found that I was able to add another dimension to the band in terms of the reverb, and the largeness and scale of the sound. In particular, I found a way of setting it up — I remember it very vividly — where I could play eighth notes and get 16th notes to repeat. [I’d use it when] we’d play “I Can’t Stand Losing You” toward the end of the set, and it became kind of a signature thing. I basically used the Echoplex from the very earliest days — I got it a few months in — right to the very end; I didn’t change it up. I think I also got a Roland Chorus, but it didn’t do what the Echoplex did.

The original Echoplexes I had were fantastic and magical. I’ve never been able to duplicate them, and it’s been a source of incredible frustration for me. I’ve tried many ways, a lot of digital devices, to replicate that thing that I could get out of the Echoplex, with not a lot of success. Very recently though, my assistant said, “I think I’ve cracked it” — the effect where I can play eighth notes and get repeated sixteenths. MXR makes this little digital pedal called the Echoplex, and it does it exactly! The one thing I want it to do, it does it. I’ve tried this with several other pedals and, dumb as it is, finally somebody made a little pedal called the Echoplex, and the bloody thing works! This fucking Echoplex has been daunting me for half my life!

You recorded Triboluminescence solo in the studio. How does working alone change the songwriting process for you? —Zakk Farley

Triboluminescence was recorded entirely alone. Well, it was me and my engineer. It’s become a very enjoyable and peaceful process for me. I like being in my studio, working on a bunch of tracks and slowly bringing them all to fruition. It’s a very personal and satisfying experience. Obviously, you can do these things with great enjoyment with a band, but it’s a very different dynamic. Right now, I’m enjoying the solo approach.

When the Police got back together in 2007, you hadn’t played together extensively in more than 20 years. How difficult was it get back in touch with them, musically? —Zayne Devlin

It wasn’t really a problem, musically. It was more the mental and emotional climate, to be honest with you. Like, we’re three guys who’ve all grown up now, we’ve got to get back and do this like we’ve never left. Musically, it was just pop songs, it was nothing I couldn’t play, and I’ve played them on and off in different situations over the years. In some sense, there was no need for extensive rehearsal.

I’ve got this band in Brazil called Call the Police [a Police tribute band of sorts that features Summers, Rodrigo Santos on bass and vocals and João Barone on drums], and they’re fucking brilliant. We just do two afternoons, and we’re off and running, it’s all there. So, I don’t think it was really difficult, musically. It was more just the emotional climate, getting the three of us to all be in the same space and have the camaraderie to go forward with it.

What was your favorite Police album to make, and why? —Zachary Cordova

That’s a difficult one. For me, I think the second album [1979’s Regatta de Blanc], because we struggled mentally to make the first album [1978’s Outlandos d’Amour]. We didn’t have any money and we could only get into the studio on Sunday afternoons. It took us a few months to make it because we just couldn’t get the time, and then we kept updating what we were doing. The second album, we were already sort of a hit band and we were playing all the time, every night of the week. We were on fire, very much into our playing, our success and our band. We made it in 10 days, because we were so into it! It’s not like modern times where bands take two years to make a bloody record — that’s kind of incredible to me. Regatta de Blanc’s my favorite, because there was so much heat in it. It’s got “Message in a Bottle” in it, and I think it’s where we really established ourselves.

I remember learning some of your tunes like “Every Breath You Take” years ago and noticed your fondness for SUS2 and ADD9 Chords. I love those chords and use them often to this day. Do you remember how or when you came across those voicings with the stacked fifths? —Andy McKee

Well, I think it arose from — you might say — avoidance of the obvious, like big major and minor chord changes, which to my ear sound corny. I was very influenced by jazz and 20th-century classical music, so in my case it was a natural move to try and insert this type of harmony into whatever I am doing.