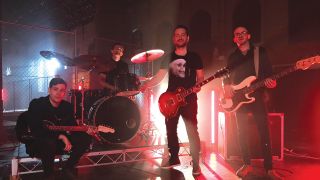 “The traditional song in 2018 has a beat, a keyboard and pretty much no guitar, right?” This is Lisbon-based multi-instrumentalist Tiago on the state of popular music at present; a formula he’s steering away from with his proudly six-string-lifting new project, Audio Force One. While the musician has had the chance to sling licks onstage alongside arena dominators the Black Eyed Peas, eccentric Swedish garage rock crew the Hives, synth-pop originators New Order and more, he’s excited to finally present a few “off-trend” anthems of his own. Interestingly, though, he cut the whole of his self-penned debut set, More, without a single piece of familiar gear.

While living in Sydney, Australia, the Portuguese player lucked into some studio time with engineer George Georgiadis (who also plays drums on More). Though it was an opportunity to workshop some originals, Tiago initially believed that recording the LP with rented gear — instead of his “beloved” Gibson Les Paul and pedal board setup — “goes against everything that makes sense.”

“It was uncomfortable,” the project leader admits with a laugh, adding anecdotes about how the intonation issues with the Les Paul he had on hand meant he had to tackle the bend-heavy leads, on tracks like “Rocky Balboa,” more times than he would’ve liked. That said, Tiago also quickly banged out the sinisterly slippery slide work on creepy-but-catchy album track “Fierce” just seconds after conceiving the melody.

Much of More’s lyrical content seems focused on the ins and outs of love, running the spectrum from the gushing proclamations of acoustic breezer “The United States of Your Love” to the motive-questioning diatribe, delivered above the dance-rock plink of “YDKNAL” (a.k.a. “You don’t know nothing about love”). More than anything, though, Audio Force One’s debut is about perseverance. Tiago calls “Black Eyes,” the record’s slinky first single, a metaphor for the “struggles you have through life” and how you have to accept the challenges that come your way, no matter the outcome. Like, for instance, recording your debut album with a wonky loaner guitar! Tiago concludes, “You can go through a big struggle and then have great things happening to you. You just have to always believe in yourself.”