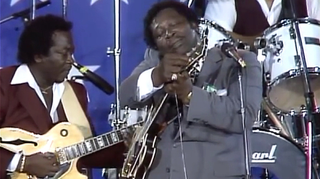 What makes this performance so special is what happens about three and a half minutes in. King breaks a string on his guitar and changes it himself—onstage—while he continues performing the song.

All the strings are still clearly attached to the guitar at the three-minute mark. The video then cuts to a shot of the horn players, and when it returns to B.B., the highest string is dangling from his headstock.

At around 3:12 you can see a roadie in a blue cap running behind the band; a few seconds later he hands a replacement string to King. After nonchalantly removing the broken string, King winds the new one as he sings up a storm.

This is pure showmanship and professionalism in action. It's one more reason the guitarist is so dearly missed.