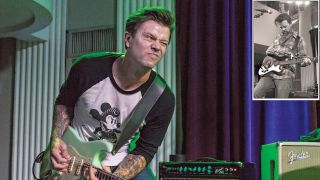 Despite his Wisconsin roots, Austin blues-rocker Eric Tessmer — a familiar face on the city’s live-music scene for nearly 17 years — truly embodies the “Texas guitar slinger” archetype. He’s a rising star who sells out shows from the Lone Star State to the Golden State, and gear manufacturers are lining up to endorse him. He’s become a fine singer and songwriter, too, and powerful tracks such as “Good So Bad” celebrate his sobriety and evolution. For more about Tessmer, dive into our Q&A below and head to erictessmer.com.

What got you started — and why Austin?

I come from a family of guitarists and got into Jimi Hendrix, Led Zeppelin, Cream, Pink Floyd and the Beatles. I started tracing blues out of that — Albert King, Elmore James, etc. When I got hip to Stevie Ray Vaughan, my whole world shifted. I got into a lot of Austin cats through him. The Vaughan brothers were huge to me, and the entire Antone’s legacy. I was fortunate enough to be friends with [Antone’s founder and Vaughan brothers mentor] Clifford Antone for several years before he passed.

What are you looking forward to this year and beyond?

I recorded an EP with Sean Beavan last year in Los Angeles. There’s always another song I’m working on, more shows, more recordings. It’s good to be alive and playing music! Plus, Heart’s Nancy Wilson and I have been cooking up something cool in between our touring schedules. I’m really excited for the world to hear that. It looks like I’ll be doing some more videos with Reverb this year too.

What are your current favorite guitar/amp/pedal combos?

A Fender Vibro-King alongside a Ewell 150w Showmaster head pushing a ’61 Fender 1x15 cab and a Leslie. As for pedals, I built a fuzz circuit tester. It has sockets for transistors, and every resistor’s a pot. You plug in transistors and adjust as you’re playing. Using this tester I experiment with old transistors that wouldn’t typically be associated with a fuzz.

Tell us about your Fender Custom Shop Strat and those Silvertones.

Dale Wilson, a master builder in the Custom Shop, built it to feel the same as my 1959 Strat. I always wanted a matching headstock Strat, and the Surf Green looked so tough! He kept the feel and changed the look. I’ve had several pickups through it. I’ve been working with Mike O’Donoghue of Geppetto Guitars on a signature set of pickups. The CS Strat has been housing evolving sets of prototypes since that started.

And, ah, the Silvertones! I borrowed an early Sixties 1448 from my dad for the new EP [titled EP2]. I was floored by how massive that Masonite guitar sounded. I’ve picked up several ’63 1449s. I replaced the pickup selector toggle switch with a master volume pot. Now it’s just a matter of blending the two pickups how I want with their individual volume/tone controls during soundcheck.