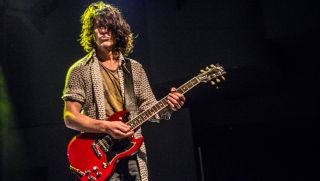 Whether it’s the colloquialism of the album’s title track, the unbridled anarchy and groove of songs like “Agent Orange” and “Locked in the House All Day,” or the hard, Chicago blues feel on tracks like “I’m All Right,” Who Shot John is radio-friendly enough to draw listeners in, while his guitar wizardry reveals a dynamic, effervescent complexity.

Guitar World recently spoke with Schenkman about Who Shot John, the Spin Doctors and more.

How would you describe Who Shot John in terms of its sound and maybe how it relates to some of your previous work?

Sound-wise, it leans heavily on my working with a trio, which is something that I do a lot, and how I’ve been understanding music through the blues these last several years. It's a good representation of where I'm at now and [looks] at a lot of different angles and perspectives that I've come to terms with.

It happens very differently for different songs. Sometimes a song can be melody-driven, like “Fortune Teller” and “Far Away.” A song can also be very immediate and other times could take years to write. “Agent Orange Blues” is an example of a tight, visceral response to a situation, whereas a song like "Who Shot John" came from a lyric I started about 20 years ago and just recently finished. I had that one in my head for years trying to figure out what the lyric meant.

What else can you tell me about the title track?

The lyric, “Who shot John at the Mardi Gras” was stuck in my head and sat around for years. When I started recording last year, I went to visit Cody Dickinson (drums) in Mississippi. I wanted him to play washboard on this record and when I got there, he asked me which song I wanted him to pull up. When I told him “Who Shot John,” he laughed and said, “Oh, man! My old man used to say that all the time.” He told me that it comes from that old, no-bullshit expression, “Don’t give me none of that who shot John. Just tell me what you really mean.” As soon as he told me what it meant I finished the lyric immediately. Sometimes you need to understand things through a different lens and that’s the interesting thing about writing. You never really know where it’s going to go.

Let’s talk about the song “Locked in the House All Day.”

That’s an interesting cross between a standard rock song and a “Hendrix” chorus. A fusion of two different musical ideas. It’s a simple rock song with guitars, drums, a rock solo and a modulation. I really dig it.

Do you have plans to tour in support of the new album in 2019?

The Spins are perpetually happening and I also have a house gig in Toronto during the week, but I’ll be out supporting it as much as I can. I'm interested in playing with a lot of different people and can also lean on a bit of Spin Doctors as well as the wide, classic blues repertoire I’ve been working the last few years. But it's not just the old songs. It’s new takes on them with different attitudes.

I try to use different things for different projects. The Doctors thing is an SG and two AC30s, and the "Eric Schenkman” thing is either a mid-Sixties Bassman or Tremolux, depending on how big the room is, and a Grace Potter Flying V. I also have a few Telecasters made by my friend, Shyboy, in Toronto as backup guitars. I use pickups by Cream T.

It’s been 30 years since The Spin Doctors first came together. Looking back now with so much perspective, what thoughts come to mind?

It's hard to believe that it's been this long. I put the band together when I was 24. At that time, you’re like a honey badger and you just don’t give a shit. You’re after what you’re after. I always loved putting bands together and when we started to roll it was surprisingly cool. We really have great chemistry. The fact that something with so much spark and fire can still be going 30 years later is amazing. We’re four guys who didn’t grow up together but make music together very naturally.

Did the success of that first album, Pocket Full of Kryptonite come as a surprise?

We knew it was a good record with a lot of energy so there was always a feeling. But I can tell you that the record company originally had no faith in it at all. Having said that, from the very first time we played “Two Princes” it was like, “If this tune is ever allowed out it will trounce.” As far as potential, there were two things about the Spin Doctors that were always immediate—the first time the four of played together and the first time we played the song “Two Princes.”

What excites you most about this next phase of your career?

I’m actually looking forward to singing more. I'm excited to do more of that as well as getting to some new venues and greasing the wheel to get a circuit to build on. That's where I'm going.