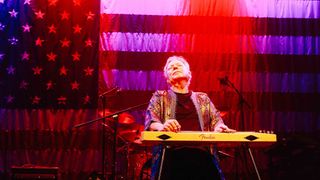 This year marks the 60th anniversary of the release of “Sleep Walk,” the classic steel guitar instrumental from Brooklyn brothers Santo and Johnny Farina, who recorded under the name Santo & Johnny. Upon its original release, the song hit Number One on the Billboard Hot 100 and earned the brothers a gold record award. And its stature has only grown over the years. In addition to being featured extensively in movies, television and commercials, “Sleep Walk” has also been covered by everyone from Jeff Beck, Brian Setzer (who won a Grammy for his version in 1998) and Larry Carlton to Derek Trucks, Chet Atkins and even the Deftones.

Furthermore, the song has been credited as an influence on Peter Green when composing Fleetwood Mac's legendary instrumental, "Albatross." That tune, in turn, then influenced the Beatles on their own "Sun King."

In celebration of the song’s 60th anniversary, Johnny Farina is performing a special show at New York City’s the Cutting Room on April 20. For more information and to purchase tickets, head here. Additionally, Johnny sat down with Guitar World to talk about the iconic song and its enduring influence.

How did you and Santo come to write “Sleep Walk”?

Our dad, Tony Farina, came home from work one day and said to Santo and me as we were practicing, “Play that song that you played the other day.” We didn't remember the song he wanted to hear! So he said, “You guys are writing good songs and are losing them.” With that, he bought us a Webcor tape recorder and said, “Record everything you do.” We would start a melody, and do as much as we could, then start another one, then go back to the first one a day or two later. With “Sleep Walk,” the harmonic line was recorded first, then we went back and put on some melody, listened, and kept changing the melody until it happened—magic.

What do you recall about recording the song at Trinity Music?

I was 16 and my brother was 19.  We were excited to be involved with record industry people, and to make a real record with professional musicians. We left Trinity with such excitement, two Brooklyn brothers are going to be rich and famous. And we both played steel guitar on it.

How was the famous steel guitar melody devised?

It just happened as we were creating original melodies.

Do you recall what guitar you used on the recording?

“Sleep Walk” has become such a classic, and was said to have inspired both Fleetwood Mac’s “Albatross” and, indirectly, the Beatles’ “Sun King.” Over the years did you ever hear from any of the artists who were inspired by your song?

I would have liked that very much. I'm still here!

There have also been so many covers of “Sleep Walk,” from artists ranging from Brian Setzer to Eric Clapton to Jeff Beck. Are there any versions that you particularly enjoy?

Can you tell our readers what you are up to musically these days?

Still writing, performing, and running my publishing company. I've written a movie script and a soundtrack for it, just shopping it around. I'm always looking for new interesting projects, and to do more shows than I'm doing.

How does it feel to have a song you wrote and recorded 60 years ago still be so well known and beloved today?

It’s so special to me, because “Sleep Walk” became my life, and to know it was never an oldie, or doo-wop, and can connect with any time. It’s real.