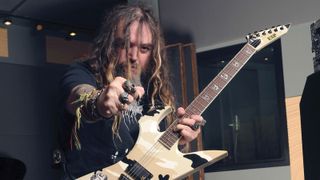 He’s a co-founder of Sepultura, and his distinctive guitar playing and singing helped put Brazilian thrash metal on the map. Over the years, he’s explored groove and death metal by leading such bands as the Cavalera Conspiracy and Soulfly, and he’s been part of the supergroup Killer Be Killed, which features members of Mastodon, the Dillinger Escape Plan and Converge. But what Guitar World readers really want to know is…

When was the last time you blew yourself away on the guitar?
—“Big” Wally Steed

When I was I the studio working on the new Soulfly album, Ritual. I was struggling with a groove song, because my producer, Josh Wilbur, was pushing me. He was talking about all these songs like “Primitive” and “Bleed” — he was looking for a particular groove. Suddenly, the riff for the song “Ritual” just blasted out, and then Marc Rizzo put the effects on top of it. The whole thing just happened, and I was really blown away. I was pretty happy with myself that day.

How much practicing do you do on the guitar, and what’s your practice routine?
—Normal Staller

I practice a fair amount. I play along to a lot of riffs on YouTube. I love watching videos of people playing and seeing what everybody’s into. It makes me grab the guitar and try to match what they’re doing. Mostly, though, I work on my own riffs — if you want to call that practicing. I can do that from noon till one in the morning. When I go into the studio to record, I want to have as many riffs as possible, so I spend a lot of time on that aspect of my playing.

As one of the greatest riff-writers in the history of metal, do you think you’ll ever record a collaboration with Brazilian groove-metal native artists, such as Naçao Zumbi?
—Tim Hall

Yeah, I hope so. That would be brilliant, wouldn’t it? They’re one of my favorite bands, and I worked with guitar player Lúcio Maia on the first Soulfly record. He’s a great guitarist, and I love his style, which is sort of like Jimi Hendrix. I hope one day we get to work together again for sure.

Marc Rizzo has played with you for most of Soulfly’s journey, as well as the Cavalera Conspiracy. How much songwriting do you do together, if any? —Michael Grout

We don’t really sit down and write together; it’s kind of more of a divided thing. I write the riffs all on my own, and Rizzo will put stuff on top of them to make them cooler. He’s into little details like that. So I would say that I do about 95 percent of the writing. But what we do together works well. You can’t try to do the same things; you have to complement each other.

Are you ever going to release a groundbreaking tribal-dubstep-shoe-gaze-death metal masterpiece? —Jason Pleasants

Yeah, sure — all of that! [Laughs] It’s on my bucket list to do a dub metal album, you know? I don’t think it’ll be dubstep per se, because I prefer the original dub that came from reggae. But yeah, of course I'll mix it with some metal. But I have to wait for the right time, and I don’t think that’s now. I really don’t care if anybody buys the record. It is just something that I want to do for my own satisfaction.

Your Cavalera Conspiracy album Psychosis is almost a year old now, and I absolutely love it. When will you tour to support it? —Michael Hinks

We’re hoping next year. I’m going on tour in Russia and South America soon, and I’m going to do songs from Arise and Beneath the Remains. Toward the end of the set, we’ll do some songs from Psychosis, so that’ll give the crowd a little taste of that record. Next year, I hope to do a whole tour and play Psychosis. A lot of people from other bands tell me they love it. It’s really cool to hear that from your peers.

Why do you seem a little tired in concert? It’s something I’ve noticed — but you’re still the best metalhead. —Antonio BloodyDoom

I think I might have seemed tired during a Bob Marley phase I went through. A couple of years ago, I would sort of hold the guitar and sing. I had seen some Bob Marley videos in which he did that, so I was trying to imitate him a bit. I think it backfired on me. People were mad — “Why doesn’t he play the guitar?” So I’m getting back to that. You know, I’m 49 now. I’m trying really hard to get in better shape. I think next year you’ll get some good concerts out of me.

Of your faith-based songs, what top three lyrics do you find uplift your spirituality when you perform them? —Chris Besonen

Mostly, “Eye for an Eye.” I love the beginning, especially the opening line: “I am what I create, believing in my faith, integrity is my name.” That’s really powerful. There are so many lyrics that mean a great deal to me, and I feel their power when I perform them live.

How has dub music influenced your arrangements and productions? —Yonatan Nathanson

It’s influenced me quite a bit. Some tracks are completely coming from the dub era, like “Bumbklaatt” from the first Soulfly album, that’s a Jamaican dub term. The same with “Babylon.” I like taking ideas from the dub world, because it’s so far away from metal that nobody really knows about it. There’s a lot of cool stuff in the dub world, and it’s fun to rip it off and put it into the metal world.

You’re probably sick of people asking, but what’s the status of the follow-up to Killer Be Killed?
—Ashley Webb

We did a demo a couple months ago. Everybody flew in, and we spent four days together writing songs. It was totally cool — we did a barbecue and went swimming. It was just days of fun for everybody. Everybody in that band is so busy doing their own things, so it’s hard to schedule time for each guy. I’m hoping we can make a new record next year.

Do you believe in life after death and reincarnation?
—Stancor

I do. I’m kind of optimistic in that area. I think once we’re done here, we go to a different place. Spiritually speaking, I also believe in reincarnation. I think we’ve been here before, and we come back. Sometimes I have this feeling of having been here a long time ago. I visit places and I think I’ve already seen them, perhaps in some sort of past life. All of that means something. I just don’t think that everything goes black when life ends. Something else has got to happen.

After decades of touring the world and recording albums, which of your records would you like to remembered for in 100 years?
—Rodrigo Meneses

I think the first Soulfly album is one of the strongest records I’ve ever made. It was definitely the most difficult album to record. There was a lot of pressure and anger going on at the time. It felt like a therapy session in many ways, but that’s why I think it’s such a truthful album. It holds up. To me, it’s the one record that I’ve made that's still very close to my heart.

If I can scrape enough money together, will you play at my next birthday party? —Chris Gibson

Yeah, why not? I love playing anywhere, so sure, I’d be open to it.

When you get sick of the music that you perform, what do you like to listen to? —Slammin’ Pete

I listen to a lot of metal. I’m like a teenager — I make playlists with, like, 200 bands on them. I find them sometimes — these old playlists I’ve made — and they’re mostly metal. But I’ll tell you, I’ve been listening to Link Wray a lot lately. I went back and listened to his old stuff, and I couldn’t believe how fucking great his guitar playing was. Being from Brazil, I missed out on a lot of American music, so I like to go back and check things out — music from the Fifties, Sixties and Seventies. So much of that stuff was groundbreaking.

Have you ever considered doing a Soulfly song with Jonathan Davis of Korn, James Hetfield of Metallica, Dave Mustaine of Megadeth and Phil Anselmo and David Peacock of Pantera? —Chris Dybala

You never know. Those collaborations are really fun, man, and we started doing that in Sepultura. I always love working with my peers. Fuck yeah, if I could get everybody together, you never know what could happen.