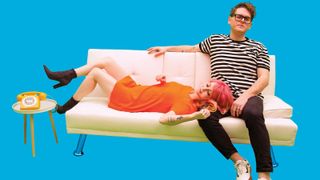 “The best thing about being in a band with your wife is sharing the highs and lows of the road and experiencing everything together in real time,” says Jared Corder of *repeat repeat.

“When we’re both tired and grumpy, we’re still on the same page. The downside is you really miss your privacy when you’re stuck in that van with the rest of the touring band.”

The wife in question, Krystyn Corder, makes up the other half of *repeat repeat, who are out promoting their second album, Glazed.

The album marks a shift away from the Sixties influence of their previous disc, Floral Canyon, toward a more Eighties feel, complete with strong vocal harmonies and stinging, fuzz-driven guitar lines.

“Krystyn grew up in California, influenced by the Beach Boys and the Mamas and the Papas, bands her parents liked,” Jared says. “I grew up listening to West Coast punk.

"I’ve always wanted to play with a lot of loud, heavy distortion. The combination of the two influences is the essence of the band. The Eighties vibe comes from the Optigan organ we used. It has discs with different sounds, and we liked them so much that it’s all over the album.”

Glazed was produced by the Black Keys’ Patrick Carney. “Patrick is one of the best guitarists we’ve worked with. He simplifies everything. Everyone knows him as a very talented and simple drummer, and he brings that approach to the music.

"He’d say I was recording from a guitarist’s perspective and I needed to concentrate on the song. I ended up saying a lot more with a lot less, vocally and sonically.”

Jared studied classical guitar at college, although not from any love of the genre.

“Frankly I hated playing classical guitar, but it made me a better musician. I went to college to appease my family. All they offered for guitar was jazz or classical, and the guys in classical were all metalheads, so they seemed more rock ’n’ roll than the guys in jazz.”

Finally, that asterisk: “There was no strategy behind it. I saw the name on a shampoo bottle, but now we’re always first on posters or band lists at festivals and clubs. The asterisk automatically puts us at the head of the list, so that turned out to be a real bonus. You can’t plan something like that!”