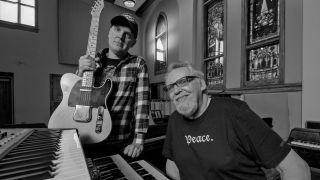 “These songs are windows back into different eras and different times of my career,” says Wynans, whose career spans more than a half century. “It’s a collection of the songs I’ve played with musicians in the past, and it shines a light on blues artists that I think need a little bit more recognition.”

The album also serves as Bonamassa’s inaugural stint as producer. “Reese inspires me every day,” Bonamassa says. “He’s as gracious a gentleman as he is talented and an icon, and he was the heart and soul of the entire session. All the guest artists performed brilliantly and brought their best stuff from the very first downbeat. It was not lost on Reese or me how blessed we were to work with such talent.”

Says Chris Layton on the reunion with Shannon and Wynans, “It was great being back in the studio with Tommy and Reese again, because we hadn’t had an experience like that together in a long time. Playing those tunes — ‘Crossfire,’ ‘Say What!’ and ‘Riviera Paradise’ — took me back to when we were working together with Stevie. It was moving to play these songs with them again.”

Adds Tommy Shannon, “It was so great to play with Reese and Chris again. It was like we’d never quit playing together; it came together instantly. The groove was there — we fell right into it so easily. It brought back a lot of great memories, because we hadn’t played these songs since our days with Stevie. It’s a great record.”

Wynans — born November 28, 1947 — grew up in Sarasota, Florida and formed his first rock band, the Prowlers, while attending Florida State University. In the late Sixties he was a member of the Second Coming, and when that band’s guitarist and bassist — Dickey Betts and Berry Oakley — formed a group with Duane Allman, Butch Trucks and Jaimoe Johanson, the need for a vocalist led to Reese’s replacement by Duane’s brother, Gregg Allman, and the subsequent birth of the Allman Brothers Band. So Reese soon joined Boz Scaggs, whose epic track, “Sweet Release,” closes the classic 1969 Boz Scaggs album, which is renowned for the incendiary guitar work of Duane Allman on Boz’s brilliant cover of “Loan Me a Dime.” Wynans’ new version of “Sweet Release” features incredible vocals from Keb’ Mo’, Warren Haynes, Vince Gill, Jimmy Hall, Mike Farris, Bonnie Bramlett and Paulie Cerra.

During the course of Wynans’ career, he has recorded and performed with Larry Carlton, Buddy Guy, Delbert McClinton, Joe Ely, Doug Sahm, Brooks & Dunn, Carole King and many others, and performed roughly 500 live shows with Willie Nelson. In 1985, Stevie Ray Vaughan drafted Reese into the Double Trouble lineup for the Soul to Soul and In Step albums. “It was unbelievable to play with those guys,” Wynans reminisces. “I joined one of the greatest trios ever, and Stevie, Chris and Tommy were on their game every single night. The Stevie songs on Sweet Release — ‘Crossfire,’ ‘Say What!,’ ‘Riviera Paradise’ and ‘Hard to Be’ — are our tribute to him.”

In 2014, the seed of a solo album was planted when Bonamassa gave Wynans a call. “He wanted to do a series of shows at Red Rocks where we would feature the music of Howlin’ Wolf and Muddy Waters,” Wynans says. “And that’s right up my alley.” Reese had previously contributed to Joe’s 2011 album, Dust Bowl. This led to talk of Reese releasing his own solo project with Joe at the helm. “I started to put a collection of instrumentals together to record and was just going to take it from there. Joe suggested we broaden the scope with vocalists and also bring in Chris and Tommy, which I thought was a great idea. When he asked me who I wanted to produce it, I said, ‘I want you to produce it!’ I had to twist his arm a little bit, and the next thing you knew, we had a plan. And the final product turned out pretty well.”

“Joe did a great job as producer,” Layton says. “He was very clear about how to proceed on each song, which made the process seamless, focused and productive. It was a real pleasant experience.”

“It always shocked me that Reese had never made a record on his own, considering his incredible track record,” Bonamassa adds. “I never in a million years thought he’d ask me to produce it, and I didn’t want to screw it up! That was my only reservation, but we talked it over and came up with the concept of putting together a list of songs as well as musicians he had been associated with, and this would serve as a template in putting the record together.

“Guitar players know Reese from his work with Stevie, but his roots go way deeper than that, from Delbert McClinton to Jerry Jeff Walker to Boz Scaggs and the beginnings of the Allman Brothers Band. So this record is like a journey through time as well as an education into Reese’s rich musical history. Another aspect is that even though it’s a record full of ‘guitar’ songs, it’s a keyboard player’s record, so we had to be sure to keep Reese’s playing front and center.” Adds Reese, “we hand-picked the tracks to specifically reflect the different artists and music I’ve been associated with over this long career.”

Among the aforementioned Stevie tunes, “Crossfire” features the vocals of Sam Moore (Sam and Dave); “Say What!” highlights the pyrotechnics of guitarist Kenny Wayne Shepherd; and “Riviera Paradise” boasts the triple-guitar attack of Bonamassa, Shepherd and Jack Pearson. The Arc Angels track, “Shape I’m In,” boasts guitar and vocals from Kenny Wayne Shepherd and Noah Hunt; and the Family Style track, “Hard to Be,” is built on the vocal performances of Bonnie Bramlett and Jimmy Hall. The album closes with a beautiful solo piano rendition of a 1968 Beatles classic “Blackbird.”

“I chose to close the album with ‘Blackbird’ because I think it’s one of the best songs ever written,” Wynans says. “Joe wanted me to record a solo piece, and this was the first song I thought of. I think it’s a perfect piano song, even though Paul McCartney cut it as a solo acoustic guitar piece. It sounds great on the keyboards, and I love the lyrics, the nostalgic feeling of the song, and I love playing it. I think it’s the perfect way to close out this record, one that I am very proud of from beginning to end.”