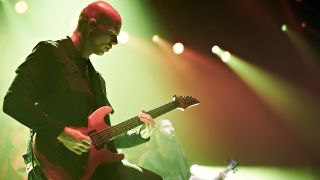 Though it’s been a long time coming for a band formed in 1992 and reactivated in 2000, Stone Sour’s first ever live recording actually happened without any of the members really knowing.

Guitarist Josh Rand was initially planning for the group to document one of the Russian dates on their Hydrograd world tour, though unbeknownst to him or his bandmates, the equipment had arrived and was being tested out in Reno...

“Our sound engineer basically did a test run at that show,” says Rand, of the 16 tracks recorded for Hello, You Bastards: Live In Reno.

“That’s what feels really cool about it: none of us really had an idea. And it’s literally what went down that night - there are no overdubs or any corrections whatsoever, which also helped the whole process of putting it out.

"At that point, we were at the end of our cycle. I think that was show 170-something. We were a well-oiled machine when it came to playing those songs, so it came out great. We’re extremely proud of there being no fixes whatsoever.”

As for what made the guitarist feel like now was the time to start preparing for a live release, it was - by his own admission - a combination of different factors, though perhaps most of all the realization that his band were sounding tighter than ever and standing very much on their own terms.

“Honestly, I think it’s a mixture of several things,” explains the axeman. “Firstly, it felt like the right timing and situation for us. We’re in a very unique situation with Stone Sour obviously, having [Corey Taylor in] Slipknot also.

In the past, we’ve been really mindful of one band releasing something while the other is active. This time round, it feels like both bands have reached a level of their own, they can each be their own individual thing without affecting the other at all.”

You’ve been using Ibanez guitars and Hughes & Kettner amps for quite a while. Was there anything new in your live rig for the recordings?

“It’s all the same amps and guitars, except I went back to DiMarzio for my pickups. At home I use all of the companies, everyone makes great gear so it’s more about the application into what you are doing.

"The Fishmans sound unbelievable for the heavier stuff. But for the slower songs or less metallic songs, I needed pickups that were more - I don’t want to say dynamic, but I can’t think of another word. A set that could do all sorts of things rather than just one thing very well.

“So I went back to DiMarzio passives instead of anything active. There’s a different articulation I find. It can be a positive or a negative. If we were just playing metal for the entire show, I would be active… but we don’t.

"I need a guitar that can be used for a heavy song like 30/30-150 and say if my other guitar goes out, it needs it to work for Through Glass without sounding brittle. It just made sense. My collection has gear from everyone, it’s all about what you use it for.”

What is it about the TriAmp Mark 3 that works so well for you?

“I honestly don’t know… for some reason that amp really seems to translate well with my playing or my hands. To be honest, it all starts with the hands - that’s where the beginning of your tone is. So that’s the one that works for mine.

"I’ve been with Hughes & Kettner since 2006 and I played the Mark 2 for a bit. I’m not saying other amps don’t sound good, it’s just that something happens when I plug into these heads. It’s like these amps were built specifically for me… it’s crazy!”

Are there any pedals that have been blowing your mind recently?

“I love pedals, period. I have over 100 in total, I think; there’s stuff that I probably don’t even know I own (laughs). My favorite is right now is the Eventide H9, it’s so diverse and the quality of the effects is amazing.

"I also really like the Electro-Harmonix Talking Machine. And I’ll usually collect anything that Jack White uses, all his limited edition stuff like the Gamechanger Audio Plasma Coil.”

What do you think is your biggest strength as a guitarist and songwriter?

"A great guitar player knows when not to play and went to let the music breathe, regardless of their abilities. That’s the problem I have with a lot of the more technical stuff out there: there’s no space. Knowing when not to play sounds simple but it’s really not, especially when it comes to solos.

“Allowing music to breathe is very important. When I started out, I was quite lucky - over the course of three months of woodshedding, I went from basic stuff to Mr Big, Satriani and Vai.

"I’ve backed away from solos over the years... when we started out in 2002, nobody was playing them so I was more into it. Now I’m more excited about writing great songs and layering than any 20-second burst of 32nd notes.”

Was there a breakthrough on guitar where theory or technique started to make more sense?

“Not really. I changed from bass to guitar almost by accident while jamming. I think it was the song Addicted To That Rush and I was playing Billy Sheehan’s part on the guitar - so I guess that was the big moment for me.

"I practiced like mad back then and when people tell you to start slow and build up, they’re 100% right. It will come over time and sound clean and correct. Practice something sloppy 99 times and the 100th time will still be sloppy.”

Do you still find time to practice these days?

“Yeah, I try to find exercises and examples that are extremely difficult. I still get frustrated with them, trust me! It’s important to grow and you have to challenge yourself constantly in order to do that.

"Thanks to the Internet, there is so much information out there - you can have live video lessons, which is crazy to me. When I started, you had to wait every month for Guitar World to come out, now you can find thousands of videos to help you sweep-pick right away.”

You and Corey first met in the early 90s and started a band called Criminal Mischief...

“Shout out to Criminal Mischief... we were terrible! It feels like we’ve known each other forever, it’s like 30 years now or something crazy. I think it’s because we learned how to play and write together, so our language is kinda the same. Whenever I want to change parts or try something, Corey instantly gets what I’m saying.

"We’ve stuck together in how we write songs - though granted, I don’t write lyrics, but we formulate things very much along the same lines and totally understand each other. Over time, it just seems to work more and more.”

You were both clearly big Alice In Chains fans...

“They definitely had a huge impact on us, what a fantastic band. Those harmonies are incredible, just haunting and perfect. Jerry Cantrell writes amazing riffs, they’re not super technical and yet it’s hard to make anything sound the way he does.

"Sometimes the technicality doesn’t have to be 32nd note picking, but rather just how a part is played. Some of the easiest stuff to learn can be the hardest stuff to replicate. His tone is very recognizable and heavy… they were a fantastic band back then and they still. They still put out all this amazing music.”

The Hydrograd cycle has seen you adopting a cleaner and healthier lifestyle. How’s the been for you?

“Life is great now. I ended up getting a new house and I literally just finished my home studio, which is like the ultimate dream for me. It’s been difficult at times, but that’s life. I had to make some changes.

"Coming back to all of this, some people thought it might be a little early, but being around alcohol has gotten easier with every day that passes. It doesn’t even bug me anymore.

“The touring life isn’t easy in that sense, when you’re a traveling musician, you have everything available to you at any point in the day. There’s a lot of time in the day to kill. That’s why I think there are so many musicians that end up as addicts.

"Fortunately for me, I had a breaking point. I have a great support group, including the band, which makes me lucky.”

The last few years have also seen Christian Martucci settle in his role within the band. He definitely seems like a good fit...

“He’s a perfect fit for our band. He came in and kept it very low key and respectful of the old songs. He quickly became one of the guys, we’re just a bunch of clowns and that’s all we do when we’re on tour or making albums. The live album really shows how tight this band is right now and how well we work together.”

Finally, with Slipknot in the midst of a world tour, have you made much progress in the follow-up to Hydrograd?

“That’s a good question… to be honest, the band is on hiatus right now with no timetable on a return. It’s a mixture of needing a break, plus Corey wants to do a solo album, so I don’t know when there will be new Stone Sour music.

"I have started writing things but I don’t want what it will end up being - something later for Stone Sour or maybe a new project for me or whatever. I haven’t really thought about it because I’ve been working on this live release, plus we have some exciting stuff getting announced next year which I can’t say yet.

"But as far as a proper Stone Sour record, I genuinely have no idea when that will happen...”

Hello, You Bastards: Live In Reno is available now via the Stone Sour store.