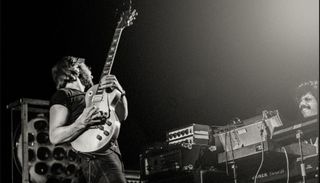 Over the course of 37 minutes and six songs, Al Di Meola explored a dazzling variety of styles (jazz, flamenco, Latin, hard rock) and sounds (various electric and acoustic textures) on his second solo album, Elegant Gypsy. The album has become a jazz-rock fusion classic with guitarists, thanks to two standout tracks: the blazing acoustic duet with Paco de Lucia - Mediterranean Sundance - and the breakneck proto-shred masterpiece Race with Devil on Spanish Highway, which rocked harder than most metal circa the album’s 1977 release date.

Like many rock guitarists of that era (and unlike most of his jazz guitar peers), Di Meola favored a Gibson Les Paul and Marshall amp for his electric rig, using a 1971 Les Paul Custom customized with DiMarzio Dual Sound pickups and coil-tapping switches and a 50-watt Marshall half stack to generate the appropriately heavy distorted tones for Race with Devil.

However, unlike most rock guitarists, he dialed the amp’s treble and presence controls almost all the way down and turned the midrange and bass controls all the way up to give individual notes voluptuous body with thick midrange even when he played lightning-fast palm-muted runs. Di Meola’s Marshalls were likely USA export models shipped with 6550 tubes instead of EL34s, which provide tighter and brighter overall tone compared to the inherent warmth and compression of EL34 tubes.

Effects can be heard throughout Elegant Gypsy, albeit sparingly. Flanging appears on a long passage in Flight Over Rio, and synth-like textures generated by a Mu-Tron Bi-Phase grace Di Meola’s main solo in Elegant Gypsy Suite. On Race, effects are used on a handful of brief overdubbed accents, including tape or analog delay echoes at 0:31, 0:53 and on the intro and outro of the solo that starts at 2:54.

However, most of the guitar’s tonal variety on Race is produced by simple variations in volume control settings while both pickups are engaged. For fatter, singing tones on solos, Di Meola backed down the bridge humbucker’s volume knob, and for a brighter attack with a hollow, horn-like midrange he used both pickups at full volume, sometimes backing down the neck pickup’s volume knob to further emphasize attack.

TONE TIP: Use the Marshall’s Classic Gain channel and dial in a moderate amount of gain. The Super Distortion pickups should provide ample brightness and clarity, even with the amp’s treble and presence controls all the way off. If the tone is too dark, boost the treble control sparingly.