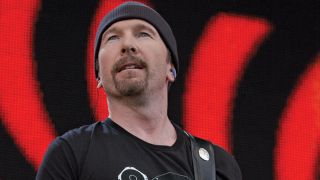 Considering that U2 guitarist the Edge has been a bona fide tone geek for decades, it’s surprising that he didn’t discover the tweed Fender Deluxe amp until rather late in his career — 2004, to be exact; after his guitar tech Dallas Schoo bought him a 1957 Deluxe with the 5E3 circuit — when the Edge asked for a small amp that he could play at home and use to record demos. However, when the Edge acquired his first tweed Deluxe, he immediately put it to very good use — the amp inspired him to write the main riff for the song “Vertigo,” only 20 minutes after he first plugged into it.

According to Schoo, the Edge used only four pieces of gear in the studio when recording “Vertigo”: “a Line 6 DM4 stompbox, a vintage echo unit, a vintage Sixties Telecaster and a vintage Fender amplifier.” During a Guitar World interview he conducted in 2005, during U2’s “Vertigo” tour, the Edge revealed that the guitar in question was a 1966 Telecaster with a Lake Placid Blue finish, maple neck and Bigsby vibrato tailpiece. The “vintage echo” in question is undoubtedly the Korg SDD-3000 digital delay that has remained an essential element of the Edge’s signature clean tones since the mid Eighties.

The studio recording of “Vertigo” features two distinct guitar tones: raw, raunchy distortion for the main power-chord riff and a clean tone with long, ambient delays for accents and a mid-song instrumental break. The distortion’s delicious grind comes courtesy of the overdriven Deluxe, pushed even harder by the Line 6 DM4 Distortion Modeler in the pedal’s Tube Drive setting, which models a Chandler Tube Driver. The clean sound is classic Edge, with the Deluxe turned down just to the brink of overdrive and modulated delay providing depth and ambience. Even though the Edge tours with a massive rig that resembles NASA Mission Control, on this song — and as he’s often done throughout his career — he proves that less is truly more.

TONE TIP: Stacking overdrive tones from the amp itself and the pedal provides the ideal amount of grind, but be careful not to overdo either to retain definition and brightness. The Memory Boy may be analog (not digital), but its warmth and triangle wave modulation nail the vibe of classic Edge tone.