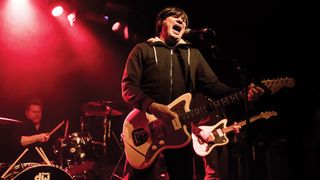 In their more than 25-year career, Austin's ...And You Will Know Us By The Trail of Dead have produced a continual stream of brilliant albums. Though the Pitchfork hipsters would have you believe that their discography began and ended at 2003's Source Tags & Codes, it is, while strong, perhaps the most middle-of-the-road of their releases.

Before it, the band released their self-titled debut and Madonna, a thrashy, chaotic punk classic with all the energy of genre masters like Sonic Youth, but also an undercurrent of expansive, cinematic ambition that would come to be realized on future releases.

Though Source Tags was the fulcrum for those ambitions, it wasn't until their later albums The Century of Self and Tao of the Dead that this formula was perfected, with thrashing guitars battling dual drum kits, rich synth arrangements and occasionally 15 minute-plus song lengths.

Now, fresh from playing anniversary shows for Madonna, the band returned after an absence of several years with a new album, X: The Godless Void and Other Stories. It caps off a period of change for the band, with co-founder Conrad Keeley returning to the US after living in Cambodia for several years.

Though he's lived in the US for most of his life, Keeley holds an Irish passport, and his return was largely beyond his control, as a result of residency restrictions.

It's in this strange, transitional period for the band that we catch up with them in Manchester, UK, during the European leg of their album tour - before COVID-19 struck.

Sitting down with Keeley just before their soundcheck, we're also lucky enough to catch fellow Trail of Dead founder Jason Reece as he wanders past, glass in hand.

Our first question is about the new album - why now? It feels like it's been a while coming.

Keely: "We were always going to make another album,; it was only a matter of time. The real question for us was why it took so long. It would have been out two years ago, but things just had to take as long as they did, you know? We deliberately made a point of not rushing it."

Apart from taking longer, what was different about the recording process this time around?

Keely: "The two main differences were that we didn't have a deadline, because the producer we were working with, Charles [Godfrey] was kind enough to be open-ended about how long we worked on the record.

"In the past we worked with our old producer Frenchie Smith, and he has a [much tighter] schedule, he's very booked up. So y'know, when we schedule with him, he'd say 'well I've got to be done by the end of this month, because I've got another session after this.'

"With Charles, he had a lot more freedom, so there was no deadline, and he was doing other projects, off and on, off and on, but there wasn't any end date that we set. Then the other big difference was that, whereas in the past, we've always worked with a band, you know, with our other members, and worked on the album together; this one was just primarily me and Jason [Reece]."

So really brought back to just the original core of the band?

Did that mean quicker decision making? You guys must be pretty used to working together now...

Keely: "Yeah, [but] it drew it out in a lot of ways. When we work with other people, their schedules help to expedite the process, but without that need to have an end date, it just kept going on and on. But y'know, maybe that's what will make this album different to our other albums - that we were able to put a lot of time into it."

So the time wasn't spent endlessly revisiting things, but working on and building out ideas?

Tell us about the gear you used on The Godless Void.

Keely: "I was using the J Mascis version Jazzmaster for a lot of the overdubs. [the primary guitar takes] were that, and our producer had a Tele, a beautiful Telecaster that we would use. I used a Gretsch Country Classic that I've had for years, a semi-hollowbody.

"There was also time to explore pedals. I've never really been into pedals, and it's been a more recent thing for me, so I was doing a lot more with different types of delays and stuff - the TC Flashback Delay, an EHX Small Stone, I have that with me now. I was also running the guitar through some of the synthesizer apps I have on the iPad."

Reece: "I feel like we were using whatever our producer Charles had around, so as far as amps go, we were mainly using a JCM 800 Marshall. It ain't broke! Then, obviously lots of delays as far as layering guitars. We used an Orange Tiny Terror as well. With Orange gear, you get this darker, more sludgy sound. It's the doom sound. We used that for some of the tracks, mainly for layering guitar tracks.

"Then there was a Line 6 Firehawk multi-effect. That one, we managed to get some fucked-up sounds out of. I tried to use it live once, but it sucked, there was latency in it - but if you're just overdubbing, we found some good stuff on it. It was used on Something Like This and a couple other tracks for crazy delays, reverbs and saturation. I'm sure there was a [Fender] Jaguar we were using [too].

How about live? I saw the Jazzmaster over by the stage...

Reece: "I've got the same Sheraton that I used on the record. I dunno, the Sheraton is a cheap guitar, but for me, it seems to really gel with my playing. It's a workhorse, you know?"

Is there anything about your approach to the guitar that's changed?

Keely: "I'm definitely more into pedals, and that took me years to get more into. On this tour alone, I just got a compressor pedal for the first time, and a beautiful reverb - the [Strymon] BlueSky.

"I got Jason and Ben the Boss Space Echo, because they needed a delay, and I've been using the [Electro-Harmonix] Canyon. Then, ironically enough I'm using the really cheap Boss ME-30. I've had this thing since Cambodia, so it's survived the tropics. It's been in terrible conditions, and still it works."

You've mentioned that you were experimenting with synthesis more - was that only software, or did you use any hardware?

Keely: "On this album there's a lot of [lyrical] references to synthesizers, because I was getting into them. Semi-modular is what I've been working with. I've got a MatrixBrute, a couple Arturias, and the one that Behringer just put out, the Neutron."

That's cool. Were ideas for the album mainly generated on the synth or guitar?

Keely: "It depends. a lot of atmospheres were synth based, but the songs were definitely more guitar."

Reece: "I think the Digitech Whammy pedal was the main reason why I wrote this song called Who Haunts the Haunter. It uses an open tuning, and so it's that, DDDGBD [and the Whammy] combined."

Given that the recording process was so protracted, we're curious about when you started writing for the album.

Which would have been in Cambodia?

Keely: "Yeah, that was in Cambodia."

What was different about writing there versus in the US? This record has been transitional, both well, geographically, and as a band, by the sounds of things.

Keely: "It was kind of interesting, because when I look back at the writing process for the songs, most of the songs that I came up with for the album happened in this short two week period of creativity... that's why a lot of the songs are based on a musical motif, one, flat three, two four, which I kind of play around with in different variations throughout the album. A lot of the songs share that chord progression."

That makes sense, the album is super consistent thematically and musically. It sounds like that was a very conscious effort.

Keely: "At first it was conscious, and as we kept working on it it started to pop up subconsciously, which I found kind of interesting."

Did you write the lyrics or the music first?

Keely: "The lyrics did come later, but they were tied in with a sense of like, what I was experiencing as I moved away from Cambodia, a sense of loss and melancholy in having to say goodbye to somewhere I loved."

There's often a sense wistfulness or melancholy in Trail of Dead's music at the best of times...

Keely: "I guess it's always been something I excelled at, even when I look back at my sophomoric compositions from when I was like 16 or 17. It just seems to be something I'm really good at expressing - wistfulness. Must be the Irish part.

"[Though] I think that the heart of a lot of our music is a sense of optimism. I don't think that we as people are pessimistic. I don't have a bleak outlook on the future or even on the destiny of mankind. I know that it's quite trendy right now to kind of be a bit doom and gloom about the future, but I for one have never given way to that sense of hopelessness about what our potential - our human potential - is.

"So although the past can be sad, I always have an optimistic view of the future, and I hope that comes through musically and lyrically.

If that's what you're wanting to express with your music, then what do you look for in the music of others?

Keely: "I look for beauty in music... It's probably why I don't listen to a lot of rock music, bands that we get compared to I'd never listen to. I'd never listen to someone like Queens of the Stone Age, nah. I listen to stuff that I can make art to while I'm listening to it, something that inspires me."

Final question - what do you love about music?

Reece: "I love the camaraderie with the people that I meet, across the world. Music is communication, and it's this unifying force. It feels like it doesn't matter where you're from, if you're involved with something musical, it becomes a language, y'know?"