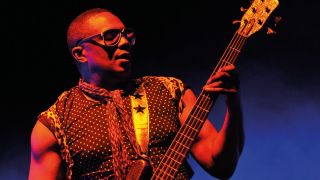 The Brand New Heavies are a London-based acid jazz and funk band, formed some three-and-a-half decades ago. Founding member and bassist Andrew Levy chats with Bass Player about the band's latest album TBNH, and the gear he uses to bring the funk thunder.

What gear are you using at the moment?

"I’ve got an Aria Pro II SB that I’m getting to know. I’ve still got to get used to the top end not being there, because I’m used to Jazz basses."

Why did you change to the Aria?

"It just cuts through and there’s no boominess, so it was quite easy to get a good sound onstage. We’ve got a lot of fast tracks and syncopation, so anything with too much bottom end gets lost in our set. I’ve also got EMGs fitted to a Squier Jazz bass - I absolutely love them.

"The Squier is light on my shoulders, so I’m able to bounce around the stage with it. Maybe Squiers don’t last as long because some of the parts are not perfect, but I’m enjoying using it. I put the EMGs on to give it a bit more bite through the set. I think the '80s bass sound is coming back."

Could be... How about amps?

"I’ve been using a Markbass, a very, very, heavy combo. It’s small, with unbelievable headroom. It’s just outrageous. It doesn’t flood the stage with low end, which can overcome the sound on the stage. It’s a 1,000-watt combo, which is a pretty substantial little amp.

"I’m actually moving away from valves because I just find that they’re not fast enough. Valve amps are lovely to record with, but onstage I’m going back to transistors because they’re faster and I feel that they’re better suited to where the band are at the moment."

Any effects in the signal chain?

"Tons. I’ve got a lovely effects box. I’m using a Dunlop bass wah, a boost for solos, and a bass fuzz by TC Electronic."

Are you using in-ears onstage?

"I tried in-ears, but I think I’m past it in terms of converting. I really need that physical air moving around me. I tried it, but I like feeling completely connected to the crowd more than the actual band, in a way. I want to hear what the crowd hear, and if I can’t feel it, I can’t play. I’m untrained, and everything I know is through my ears - so as long as I can get away with it, I want to keep those in-ears out."

Is your live set a mixture of old and new songs?

"Yes. Everyone wants to hear Dream Come True, Never Stop and You Are The Universe, so 90 percent of the set is the classics. We’ve added the stuff that’s been on the radio, three songs I think, because we know our crowd and we know what they want to hear. We might add a third, which is quite a catchy song called Dance It Out, but I think the maximum is four new songs."

In the old songs, do you play the bass parts exactly as they were on the originals or will you change them up?

"We went through a phase of changing the songs to keep them interesting for us, but we’ve gone back to the original tempos and the original basslines. Songs like ours are tough to change unless you’re going to change the drum pattern. I like to keep them exactly the same because there’s something special about when we wrote them."

Has your bass playing changed since those early days?

"I feel like I’ve improved. My speed is a bit better, which is bizarre; usually it goes the other way. I’m surprised at how fast I am, and my detailing is cleaner. Also I don’t practice. I only ever practice when I’m playing with drummers or unless I’m learning new songs at home.

"I think I’ve become a much tidier player. I always try and play less than I need to, so if I can feel the band going nuts and that everyone’s getting a bit happy, I pull the whole thing back."

Are you playing four strings or five?

"I always try and stick to four. Sometimes and You Are The Universe were recorded on five, so I switch to a five for those two songs, which is a bit silly, but I’ve just never bothered to relearn them. There’s one low note that’s a big part of You Are The Universe, which has become a part of the show, so I kept it in there."

You’re self-taught, am I right?

Who were the bass players that you admired as a kid?

"I grew up with a lot of reggae, having Jamaican parents and my dad being really into buying records and stuff. But I wasn’t one of these guys that sat down and put the bass player on and copied it - I listened to the whole song. A lot of Miles Davis too: I used to learn his solos just in my head, not on bass, and I think that helped with writing melody and writing songs."

"Bernard Edwards, who I met in a Chinese restaurant in New York. He was chomping away, chatting about touring and stuff. It was quite reserved. We were so nervous and shy back then. All the top guys, you know - Louis Johnson, and anyone that’s played with Quincy Jones.

"Also Bootsy Collins, and Paul Jackson from the Headhunters. He’s the main guy that really got me into learning how to syncopate. George Porter Jr. of the Meters was pretty hardcore too."

You can really hear those influences in what you went on to do in the Brand New Heavies.

"Yeah - short, tight notes, but I’m really about creating my own sound. The way I position my fingers sometimes during a song, like on Brother Sister, I’ll move my hands right up to the end of the neck because then you don’t get the transients and you’re away from the pickups, so you’ve got a smooth attack."

How has the new album gone down?

"We’re astounded by how well the new album’s been received. We’ve done four times as many sales as any album since the big albums.

Do you write differently these days?

"I always try to do as little as possible and really, really focus on the lyrics.

"When you’re in an acid-jazz/funk/sort-of-dance band, you want to do your riffs and focus on the groove of the bassline, and I’ve got to stop myself. If a song’s really going to travel, you’ve got to pull back and make sure that the song is the star, as well as the lyrics and the singer.

"We’ve got very commercial ears on the stuff we do now. For example, chucking brass over everything - we were told to pull back on that by the label. Apparently brass ages the song, and there’s a fine line between it sounding dusty and sounding cool."

Do you welcome that kind of feedback?

"Maybe 20 years ago we would have told them to piss off, but the days are numbered, and we’ve all got mortgages and school fees to pay, so we listen. It does make sense, so I’ve just been trying to put very, very little into the songs. Live, we can do what we want. We can add brass all over the songs, and percussion breakdowns, and everything!"