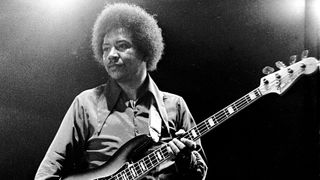 When you’ve played bass with the finest guitarist who ever lived, at the biggest and most important gig there ever was, you’re in a select crowd - and Billy Cox is at the top of the list.

Jimi Hendrix was the man: Woodstock was the event. From all these years’ distance, the impact of those frantic, disorganized three days on Max Yasgur’s farm in New York State still looms large - but Cox is stoic about it.

As he should be: a former army man, he prides himself on being the musician who took Jimi Hendrix in hand and guided him through the last recordings he would ever make before his tragically early death.

Billy first met Jimi by accident in 1961, ducking into Service Club 1 at the military base in Fort Campbell, Kentucky to get out of a sudden rainstorm. He was impressed with the guitar sounds he heard coming out of the club and introduced himself to his fellow private Hendrix, telling him that he played bass.

The two became fast friends and bandmates, leaving the army at about the same time and playing the club circuit in the area. Their early work together peaked in a band called The King Kasuals, which played the chitlin’ circuit’ around Nashville and around the southeast USA.

When destiny came calling for Jimi in the shape of manager Chas Chandler, who met Hendrix in New York and suggested a move to the UK, Jimi asked Billy if he wanted to come along. Cox was broke, however, and passed on the opportunity, spending the next couple of years backing American R&B artists and watching as his friend’s career went stratospheric on the other side of the Atlantic.

When the Jimi Hendrix Experience (Jimi plus bassist Noel Redding and drummer Mitch Mitchell) broke up in 1969, Hendrix called Cox again - and this time the bassist didn’t need to be asked twice. Cox joined Hendrix in England and formed The Band Of Gypsys, also playing Woodstock as Gypsys Suns And Rainbows and recording until Hendrix’s sudden death in September 1970.

After this pivotal event, Cox went on to become a respected session man and has carved out a long career in the Charlie Daniels Band and other outfits.

Following the release of The Band Of Gypsys’ performance at Woodstock on DVD, Billy was on hand to recall some of those far-off moments of glory…

How do you remember Woodstock?

"You cannot separate the music from the Woodstock festival itself. I consider myself blessed to have played at the party of the millennium and to have been the only man to have played in The Jimi Hendrix Experience, the Band Of Gypsys and with Jimi in Gypsys Suns And Rainbows at Woodstock. Woodstock was an accident and won’t happen again."

How does your bass-playing at the gig sound to you after all these years?

"My bass playing still holds up after 35 years. It still sounds pretty good to me! I still sound the same. My influences were Ray Brown, Ron Carter, Charlie Mingus: the bass players of that era, you know?"

What about contemporaries such as Jack Bruce?

"I liked Jack, he was okay. Also Jack Casady. When someone plays the same instrument as you, you kinda listen to those people. Paul McCartney was also an excellent bass player, I admired his style. I liked his uniqueness. I see playing an instrument as keeping a conversation going, and he’s great at doing that."

Did you rate Jaco Pastorius?

"Jaco was great. I came to know him, he was a genius. A complete innovator with a lot of things he did with the bass. I have some fretless basses myself, but I use them mostly on jazz gigs and so on, mostly because then I can get the same effect as an upright."

Do you play five-string bass too?

"I have a five-string, I find the extra B does a lot for the presence of the bass. When I play gospel music, the B string comes more into play. I don’t have a six-string bass though."

"I’ve designed a bass for Cort Guitars. It’s called the Billy Cox Freedom Bass. When you look at the bass itself, you’re looking at an expanded P-J configuration: it has a reversed split pickup and two single-coils.

"It’s user-friendly: there’s a volume and tone for each one and there’s both active and passive circuitry. Twenty-four frets. I actually designed one 15 or 20 years ago and put the design away into a filing cabinet before I was asked to design one for Cort."

"I use Ampeg SVTs for the larger gigs and a 250-watter for smaller shows. I used Marshalls with the Band Of Gypsys, but I don’t have any of those now. Matter of fact, I used to have one of Jimi’s old amps too.

"With him I played Fender Jazzes or Precisions, it just depended on how I felt that day. We’d go into the studio and I’d use a Jazz for the first few days, then I’d pick up a Precision because I wanted a different sound, then I’d go back to a Jazz."

How did you and Jimi write together?

"The bass parts were written across a riff, which we used to call a pattern back then. We’d just jam a 24-bar riff and intertwine the parts until it was all written. We’d do three or four of those and that was enough to make a complete song. Then it was just a case of putting them all together.

"How did we come up with them in the first place? Just talent, I think. The Creator gives some people a natural talent, and if they dig hard they can utilize that. Jimi and I were always jamming, and he knew that I knew what we had done, so that’s how it came together."

Jimi played bass too, didn’t he?

"Jimi was a good bass player; in fact, that’s him playing on Foxy Lady, Purple Haze and The Wind Cries Mary. In Mitch Mitchell’s book he talks about how Jimi would lay down the bass parts so they could get out of the studio faster. But his most incredible bass playing was on All Along the Watchtower."

When you played Noel Redding’s basslines, did you copy them or adapt them to your own style?

"I always brought my own style to everything. I didn’t change anything, but I did improvise a little. Noel was good, but I think I brought a little more rhythm and a little more edge to the band."

It must have been a blast jamming with a guitarist of the caliber of Jimi.

"Oh, it was! I used to love jamming on classic songs like Johnny B Goode. I loved all the songs we did together. We were locked together spiritually, and I think that doesn’t happen so much nowadays: musicians can’t lock in so well together because there’s a lot of egos around. That wasn’t a problem for us because I knew I was there to support Jimi and I enjoyed the role."

What kind of man was Jimi?

"He was decent, respectable, kind, generous, naive at times - that’s the kind of person he was."

Did he struggle with drugs, as is popularly supposed?

"As far as I know he never struggled with drugs. He wasn’t the kind of guy who sat around high all the time and wanted people to go out and get more drugs: he wasn’t a 'druggie'.

"We weren’t angels, but regardless of what some people have said, you can’t go into the studio and create songs like Voodoo Chile and In From The Storm and be a druggie. Those songs require 100 percent of your attention.

"I was a stickler for this, too: my attitude was that going into the studio was about taking care of business, because every hour costs money."

What would Jimi have gone on to do, had he lived?