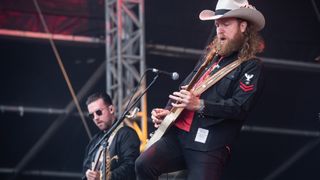 Brothers Osborne were making excellent headway on their upcoming third album - until the recent tornado that tore through Nashville brought things to a halt. “When it happened, my first thought was, ‘Man, I hope everybody’s safe,’ says guitarist John Osborne.

“Then my third or fourth worry was about my guitars. I realized that every nice guitar I own was at our producer Jay Joyce’s studio.” As it turned out, Joyce’s East Nashville studio missed the brunt of the tornado’s wrath by a mere two blocks, but the power to the facility was knocked out, and with no word on when service would be restored, John and his singer-guitarist brother TJ were forced to seek another studio to resume recording.

“Fortunately, we were able to move everything to Zac Brown’s Southern Ground studio, so we really didn’t miss much time,” John says. “It took us a day or so to re-adjust - the rooms and mics were all different - but to be honest, it was a nice change of scenery that gave us a new creative perspective. We knocked out three more songs in one day.”

The forthcoming album, tentatively slated for this fall, is the country-rock duo’s follow-up to their smash 2016 debut, Pawn Shop, and their second hit disc, 2018’s Port Saint Joe.

As TJ explains, he and his brother breezed into the recording of Port Saint Joe with the wind at their backs and sidestepped any sophomore-slump jitters, but oddly enough, that feeling is coming on now. “I think we just kicked that can down the road a bit,” he says. “It seems like people are expecting us to do something different this time, and that’s what we’re trying to do. I guess you can call that pressure, but we’re looking at it as good pressure.”

Previous singles like Stay a Little Longer, 21 Summer and It Ain’t My Fault were gold and platinum country radio bulls-eyes, but this time around the Osbornes are attempting to infuse the recordings with an energy more reflective of their live shows.

“If you come to see us in concert, things are way heavier than what you hear on our albums,” John says. “It’s more rock, but it’s our style of rock - classic and Southern rock. We love guitar players like Joe Walsh, Eric Clapton and Duane Allman. There’s stuff on the album that represents those influences.”

Helping to bolster that live-show vibe, the duo is tracking songs with their entire band - a first for them. “Previously, we made records with just our bassist [Pete Sternberg] and drummer [Adam Box], but now that we’re working with the whole gang, everything is bigger, louder and more exciting,” TJ says. “The songs sound like you’re at a live show.”

Recently, the pair appeared at the 2020 Country Radio Seminar, where they debuted a new song, Skeletons, on acoustics. While it came across as a bluesy, vaguely foreboding number, John promises that the all-electric album version will be dramatically different. “The production is overwhelmingly powerful,” he raves. “Think Copperhead Road by Steve Earle - a country band plugged into huge amplifiers.

"Out of all our new songs, I love Skeletons the most, and I think it could be the flagship track on the record.”

He also cites the solo he plays on Skeletons as a particular favorite, calling it “aggressive and bombastic.” Reminded of the acclaim he’s received of late from guitar fans and peers, he lets out a good-natured laugh and says, “It’s very gratifying to know that guitarists are paying attention, but I can’t think about blowing them away when I come up with a solo. That’s a little like wagging the dog. I try to think big-picture when we’re in the studio.”

The new album marks the duo’s third time working with Joyce, and the two see no reason to mess with a winning combination. “Each time we make a record with Jay, we feel like we learn something,” TJ says.

“He has no problem telling us when something isn’t great, but we don’t let his criticism ruffle our feathers because we know that he only wants us to be the best we can be. He’ll challenge us and we’ll duke it out, but at the end of the day we’ll wind up with something we’re all proud of.”