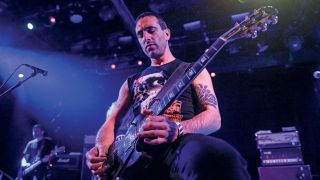 The arrival of Cave In’s long-awaited sixth album, Final Transmission, is tragically bittersweet. Just as the alt-metal-exploring quartet were tightening up demos in the spring of 2018, longtime bassist Caleb Scofield was killed in a traffic accident in New Hampshire.

Just a month earlier, he had texted his bandmates a particularly affecting voice memo of himself humming along to an oaky and ruminative acoustic lick. The pure, unaltered phone recording acts as the opening title cut to Final Transmission, the rest of the group opting to let the late musician’s playing shine in their absence. Meanwhile, they completed the rest of the album as a tribute to their friend.

“It serves as something that Adam [McGrath, guitar], JR [Conners, drums] and I felt like we had to do to get through the next step of grieving the loss of one of our best friends,” vocalist/guitarist Stephen Brodsky tells GW of finishing the collection, their first since 2011’s White Silence. “In a sense, we got to spend time with Caleb because he’s all over the record.”

Brodsky further credits Scofield for the epic scope of the nine-song Final Transmission, which effortlessly co-mingles shimmering space rock (Shake My Blood) with ambient, shoegaze tone poems (Lunar Day) and Led to the Wolves, a concussive finale that offers up an off-kilter, Meshuggah-inspired 9/8 pound.

What unites them all is Scofield’s solid seal of approval. “He was sort of like our shit filter,” Brodsky recalls fondly. “Basically, if he played on something, then it was probably worth putting the time in to finish it.”

Scofield also contributes guitar to the hypnotic All Illusion, which he wrote with McGrath during a camping trip in Maine. Later, with Brodsky, the three guitarists layered the anthemic studio recording with pitch-shifted sonics and melancholy  chord phrasings achieved through Scofield’s signature tuning scheme.

“It’s a variation of open G, but it’s got a wildcard C thrown in the mix, on the top string. We call it Secret C tuning,” Brodsky says, adding that Cave In’s natural tendency to drop their songs a half-step officially brought things down to B, F#, C#, F#, A#, C#. “If you play in the style of drop D in ‘Secret C,’ you get some real interesting voices on the first three strings.”

Cave In are playing select shows in Scofield’s honor with Converge bassist Nate Newton. They’re delivering half of all live proceeds and album sales to Scofield’s wife and children. Though emotionally taxing, Brodsky notes that keeping the sounds of Scofield’s Final Transmission going is the right thing to do.

“We’re all up for doing the tribute shows. It’s just that they’re difficult, emotional experiences. It hits home even further how different the reality of our situation is now,” he says. “People love Caleb, and we love Caleb. The interest in wanting to support the family and to do what’s right in this situation, it’s definitely there. But we have to pace ourselves.”