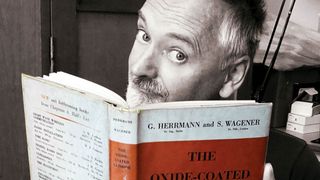 “The first Effectrode pedal was a tube phaser. It evolved from various designs. The first was a rackmount unit and then that was stripped down to a unit called The Big Green Phasing Machine, which had 10 tubes and an EM80 ‘magic eye’.

"After that came a stompbox with three [non-visible] tubes inside, a 12AX7 and two 12AT7s, and three knobs - blend, rate and width - that we named the Phaseomatic. We made about 20 of those in the first batch [Phaseomatic PM-1A] and have carried on refining the design ever since.”

What do you think makes Effectrode unique?

“Over the years, I’ve tried to be innovative and put more interesting features into the designs. For example, the new Phaseomatic [Deluxe] has dual LFO sweeps that you can set so that you never hear quite the same thing twice. It’s pretty mesmerizing!

"When I started making pedals [in the 90s], there were very few people building effects with tubes in them. I thought it would be cool to miniaturize tube effects running at high voltages into pedal form. Tubes work on different principles and I think they sound different, too.”

What’s your best-selling pedal and why do you think that is?

“The [PC-2A] Compressor. It’s partly due to the Pink Floyd[/David Gilmour] connection. It’s a useful little tool. If you use it with other tube gear, it sounds very transparent, but plugged directly into a DAW/computer it makes things sound smoother and classier.”

“Billy Corgan of Smashing Pumpkins and [Nick Mason’s] Saucerful Of Secrets’ guitarist Gary Kemp are using them, as is David Gilmour. Paul Stacey has been really helpful; it was such a pleasure working with him, getting his feedback on the pedals and tweaking the designs.”

Is there anything new on the horizon with Effectrode?

“I’ve been working on a new fuzz pedal with a single tube in it called the Occulus. It’s a new type of fuzz I call ‘aperture bias fuzz’. I thought it would be cool to be able to bias the diodes so that you can control where the clipping point is.”

Tell us a secret about effects you’ve discovered…

“It can be worth exploring a more subtractive approach to effects. Rather than piling more stuff on, dial back and use the absolute minimal amount to achieve the desired effect. It’s like using spices in cooking: you want to add just enough to enhance things without obliterating it.”

“Again, taking a more subtractive approach can work wonders. For example, rather than boosting your mids, maybe try subtracting the bass and the top-end. There’s no right or wrong way, but it’s a good philosophy.”

What’s your favorite vintage effect and why?

“That has to be [Binson] Echorecs. It’s a bit of an obsession - serious Gear Acquisition Syndrome. I’ve really been drawn into it. It’s a problem [laughs]! I wouldn’t say I’m a collector - more a ‘curator and caretaker’. They’re so stylish; the goldpanel T7Es just look brilliant. They were very expensive to make at the time and so much work went into refining them. They look gorgeous and they sound incredible when they’re set up properly.

“The workshop is full of Echorecs in various states of repair. I think of it as more of a hospital than a workshop. David Gilmour’s one has just gone back to him.”

What are your favorite effects pedal moments to be heard on record and why?

“One Of These Days by Pink Floyd. Delay is quite a thing for me. But I also like soaring high-octane guitar solos - songs like Child In Time by Deep Purple or Free Bird by Lynyrd Skynyrd. I’m not sure exactly what gear these people were using back then, but you can’t beat the sound of a good tube amp pushed over the edge. To me, that’s the greatest sound in the world.”

Are there any long-lost gems you think would be worth reissuing?

“The BBC were interested in recreating certain sound effects for the Forbidden Planet soundtrack, and I was the only person that knew anything about this, so they came over and talked to me. I built these circuits for them and the ring modulator is really interesting. I thought, ‘This must be put into a pedal.’ It uses some bizarre neon tubes. There’s something about tube stuff that just sounds much more visceral.”

For more information, head to Effectrode.