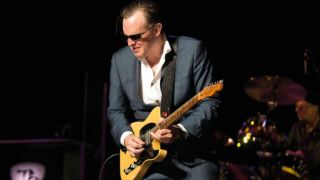 Joe Bonamassa with his 1951 Fender Nocaster – "It has a PAF in the front, so I kind of get the jazz box thing from that" (Image credit: Future / John Katic)

When Joe Bonamassa announced he was releasing an instrumental album, it’s safe to say most fans assumed it’d be a blues outing of some sort. After all, Bonamassa was named “Best Blues Guitarist” in a recent Guitar World readers’ poll.

However, when Bonamassa and his crew – including drummer Anton Fig, bassist Michael Rhoads, keyboardist Reese Wynans and guitarist John Jorgenson – formed the Sleep Eazys, they decided to go in a very different direction.

The new album is a bit of a departure from other projects. You’ve got different styles of music, plus a couple of different players along with your touring band. Where did the idea come from?

”I’ve always wanted to make a Telecaster record like my late friend, Danny Gatton. That’s why we opened up with Fun House. I’ve been friends with John Jorgenson for a long time. I’ve always admired the Hellecasters’ records and cool guitar instrumental stuff.

”I got into this record-producing business when Reese asked me to produce his [2019] album, Sweet Release. Originally, I was anxious about it, but I found I enjoyed it so much.

”One of the parts I enjoyed most was bossing around musicians who are better than me from behind the glass. [Laughs] I had this idea and I kept squirreling away instrumentals. I asked John if he wanted to do this thing under an assumed name. 'I’ll get the group together – we’ll just go to the studio and just see what happens.'

”That’s exactly what we did. We’re covering everybody from Jimmy Bryant to Frank Sinatra. I tried to make a record that, if you’re stuck in traffic in your car, it’s a cool 40-minute listen.

”It takes you on like a journey; it’s fast, slow, quirky, bluesy, country. By the time you get through whatever traffic is in front of you, the record is over and it’s a fun listen. That was basically the concept.”

Where did the album title come from?

”When you ask your friends if they want to make an instrumental guitar album for fun, everybody says, 'Yeah, that sounds like a blast' – AKA easy to buy. Now try and sell a guitar instrumental record in 2020! Ah, yeah. Hard to sell!

”I had a blast making it, and I thought John played beautifully on it. You can tell when he’s playing, and clearly my style is different; I think they complement each other.”

Were there songs that were off limits, maybe too sacred or too obvious? Or did you just look for tunes that you and John could really shine on?

I just kind of reminisced about what I used to talk to Danny about. He used to mention Jerry Bryant, James Burton and Hank Garland. Danny got me into Hank Garland. We played this song Move. When they cut that song in ’58, they were some seasoned, be-bop-playing mofos. We tried to pick songs that maybe people weren’t hip to, like Fun House.

”I used to watch Danny open with that song time and time again. So that was the anchor. Very Good Year has always been my favorite Sinatra song, and so I did this blind swell thing with orchestration. I started with bookends. I had an opener and the closer for the record.

”We just started to kind of fill in the pieces. I wanted to do a tribute to Cornell Dupree and a Jimmy Bryant song. Our engineer and my friend J.J. Glares suggested the James Bond song. Before you knew it, we had nine songs – and that’s a record.

For a guitar nut, there’s meat and potatoes to all of it. But it’s not 47 minutes of shred. It’s got a lot of variety. Did you work up the arrangements as a band or did you and John arrange them?

“I’d storyboard songs and we’d listen to the original versions. I said, 'We’re gonna extend this or maybe truncate that.' My theme word for the album was 'truncate.'

“I think guitar instrumentals have a tendency to wear out their welcome and become very one-dimensional. So if you hear the first song and the eighth song you can almost crossfade and marry them together. From there it was central casting.

“John has a great palette of colors to paint with – beautiful acoustic, beautiful slides. He even played sax on the first song. So you utilize his strengths. We didn’t do more than three takes of any song. So once these songs were charted and we had the flow, it was a matter of minutes.

“We got to the point where Blue Nocturne was the first take. We tried a second take and the interaction between Reese and me on the second verse wasn’t as good. I said we’ll go with the first. We were reacting.

“In the Bond track, I brought in Jade MacRae and Juanita Tippins who sing in my band, and we stacked the vocals and then the horns came in from my band.“

Now that you’ve produced Sweet Release, do you approach albums differently in the studio? You sound like a producer now.

“I haven’t found a thing that I enjoyed more than record production – and I thought I was going to hate it. It was actually 180 degrees opposite of what I thought the experience was going to be.

“Mind you, I don’t know what it’s like to have a drummer that’s not up to par – or songs that aren’t up to par. I haven’t experienced the tedium that record producing can become because, sometimes, things can turn against you.

“I’ve made enough records to know you have to be prepared. You have to play to the strengths, make sure the tempos are correct and the arrangements are good. That’s really the bottom line.“

Working many years with [producer] Kevin Shirley, you certainly had the opportunity to learn at the feet of a master. It helps that the musicians you’re dealing with are seasoned enough and comfortable in their own playing to take advice without taking it personally.

“I always tell people that I’ve got your best interests in mind. I’m not going to make you do something you’ll be embarrassed about. Also, a democracy is a great thing when one person’s in charge. You’ve got to stick to your vision, and you don’t want to compromise too much. You don’t want to have any regrets.“

In a production role, is it hard to be objective about your own playing?

“I’m pretty confident, so when I listen back I can say that something rubs me the wrong way or I like something. A lot of times this stuff was live in the room with solos. So if there was a little flub or a clam, I’d just touch it up. John preferred to overdub his solos after, so he’d sit down and he was pretty hyper-critical of himself.“

There are musicians out there who, if given the production role, just couldn’t stop themselves. This could have turned into a 19-month project as opposed to a couple of days.

“Plus, we lose our energy in that. We do three takes. If Anton was to think there was a better drum fill from another take, we could just take the drum fill from take two. I’d say you could play a solo 50 times and you sell one more record.

“As long as the spirit is there and the intent is there, if it’s not exactly the phrase you’d like, nobody’s going to know the difference except you. You have to take yourself out of that equation and put yourself in the listener’s chair.

“There are so many great blues albums with clams all over them. But that’s the way you heard it the first time. They did three takes and they were done. They took the best of the three and moved on. It became the vernacular, for lack of a better word.“

Which of your many, many guitars did you use on the album?

“There’s three Teles and a ’63 Fender Vibroverb, my favorite amp Fender ever made. If they were a little bit louder, I’d use them on stage. I used a ’53 Tele, a ’51 Nocaster, and I use this 1960 Tele Custom on Polk Salad Annie. That was it. I’d plug straight in. The reverb is off of the amp.“

You get a lot of different flavors out of three guitars and one amp. I thought you might’ve had a hollowbody in there.

“The Nocaster has a PAF in the front, so I kind of get the jazz box thing from that. It’s amazing how many sounds you can pull out of a guitar if you just sit there and mess around with the volume and tone knobs. Almost the full palette.

“You can get everything but delay. It forces you to be creative. You’re not married to this thing on the floor. I’ve gotten in trouble for saying things about pedals in the past. You have all these sounds right in your lap. It’s very cool to just go on a fact-finding mission.“