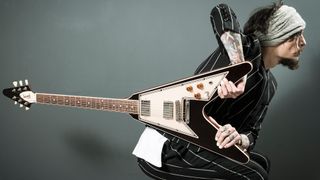 It's no secret that The Darkness are big AC/DC fans. So, if you ask Justin Hawkins to just why the Aussie rock icons mean quite so much to him… Well, you're going to get one hell of an answer.

Here, the irrepressible frontman goes deep on the magic of Back In Black, the genius of Angus Young, and the band's astonishing live volume…

"I still think Back In Black is the benchmark sonically for how you want a rock record to sound. You have to hold it up comparatively to Back In Black, because no other album has the same power and illusion of simplicity. It’s a truly timeless record.

"There’s a lot more going on in the production than first meets the ear. You can’t just have guitars playing riffs, there’s more clever stuff that [producer] Mutt Lange brought to the record and as a result it really stands up.

"Now, as a 40 year-old record, you almost can’t believe it. My brother Dan [guitarist in The Darkness] still references it for mixes. If our mixes are not comparable to that album then it isn't acceptable.

"The first track on Back In Black, Hells Bells, is one of AC/DC’s biggest songs, and with good reason. It starts off with a bell, and it actually feels like you’re inside the bell if you listen loud enough. You Shook Me All Night Long is another of my favorites because it’s essentially just a pop song.

"And the album’s title track has the ultimate rock riff. It does everything in those four bars. You don’t need anything else and even the chorus alone is superfluous. And it’s all deceptively slow, so it creeps up on you. The lyric and the delivery of the lyric, on the other hand, are frantic.

"You get sucked in by riff and then by lyric, but everything is a hook - that’s how perfect a song it is. Instead of the chorus being the big uplifting bit that the whole song builds up to, it's more like a relief. relief. The song is topsy-turvy, and really stands out from everything else in the genre where you spend most of the time waiting for the chorus.

"In this case, you’re waiting for the riff. I think they must have built it from the riff up. All of the parts are almost like an afterthought, it’s like they started with the riff and the rest was just jamming.

"A riff like that is gold dust. When we worked with Roy Thomas Baker, who produced Bohemian Rhapsody, even he said there was no better rock riff than Back In Black. If the greatest producer in the world thinks that, there’s got to be some truth in it.

"The history of Angus and Malcolm Young is that they developed individually and then came together for this band. Maybe they had the same influences, but they interpreted them in different ways and didn’t approach it as brothers until they started working together and Angus joined the band.

"There’s that story about Angus turning up and just playing solos and running about. Apparently there was a raised eyebrow or two followed by a slight suspicion it might just work.

"That chemistry between Angus and Malcolm is AC/DC’s blueprint. It really is in the fingers for those guys. The tones in Back In Black are as authentic and real as it gets. You can tell the album was recorded in a really unforgiving way, which means the playing had to really be spot-on.

"A million bands will have tried to make an album like that and found they weren’t able to play in that tight and disciplined way. Everything from the way the kit is tuned to the level of muting on the bass lines makes it such a perfect record.

"All these things sound simple but I really don’t think it is. It took the band years of doing exactly that to get to that standard. I love how it was all panned, too. All AC/DC records are like that, to be honest. You can be driving around and hear exactly what each guitar player was up to.

"Maybe that’s why they became so iconic - it was so clear what their roles were. They weren’t buried amongst each other, lost in a wall of sound.

"Angus’s parts are more saucy than fancy, and all of his solos are totally singable. Angus had a lot of recycled phrases. I think that’s the charm of AC/DC - if you’re inclined to analyze it, the music always gives you exactly what you want. There’s no left turn that leaves you disappointed. Everything they build up to, every crescendo, satisfies.

"Angus’s solos are a huge part of that. After he’s played a certain phrase, you know the next one’s coming and even if you’d never heard that particular solo before you’d know what to expect. He always delivers. He’s a legend and those are his phrases.

"He says he nicked it all from Chuck Berry but honestly - those voicings and scales are all him. You can spot them a mile off. You know exactly what he’s going to do and every time he does it you’re like, ‘Yes, I’m glad he did that!’

"I know that they monitor really fucking loud for their live shows. I don’t think there’s any attenuation happening between amp and cab. It’s all natural - real amps played through real speakers. There may be some Wizard stuff they were using on recent tours. That’s how I roll sometimes, I like a Wizard.

"The last time I went to see Rick St. Pierre, who makes them, he gave me one of Angus’s plectrums. Which felt like a clue - I’m on the scent and I’ve gotten on the trail now - I’ll soon get to the source of these secrets.

"But what we know is that it’s loud and played properly. That’s all you need, to be honest.”