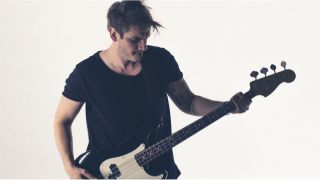 "When I was about 12 years old, I was the singer in a band. The kid playing the bass guitar quit, and I came in last to rehearsals that day.

"Needless to say, the bass burden fell on me. In many cases I guess starting out on bass is almost like an arranged marriage. Statistics show that the average divorce rate is much lower... Hmm. Maybe that’s the way to go? Force your kids to play bass, y’all!

"My first bass was a plexiglas Harley Benton. Just terrible. I sold it a few years ago, but my father bought it back for me as a present recently. What a legend. Still a terrible instrument, though!

"In Leprous, I play a four-string bass set up like a five-string. Five is too much, but acceptable. I use a Sadowsky for session stuff. Six is way too dorky. Leave that amount to the guitar players. I spend my time playing music, not applying for endorsement deals. I’m kind of picky and I don’t wanna go for anything else except Fender. If they come knocking with the right offer I’ll consider it.

"I was asked to record as a session player on Leprous’s The Congregation back in 2014-15, and Baard Kolstad, the drummer, called me up regarding a recording audition. He told me explicitly not to slap on the takes I was to send back to the band for consideration. So I slapped the whole thing, and landed the gig."

"I’m not a die-hard slapper, but I hate the stigma slap and tapping gets. If it serves the song, that’s cool. Most of the time it won’t. Don’t go all apeshit with your thumb just for the sake of it, unless your name is Marcus Miller - then it’s cool.

"The greatest bass player that ever lived was Jaco Pastorius. His imprint on popular music is just indisputable. If I could get the bass tone of any album ever released, I would choose Lateralus by Tool among hosts of records and sounds. Stop nerding on gear and realize that good sound is in the hands. All the cool brands out there won’t save you."