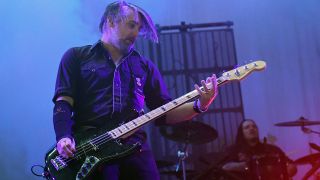 When Paul D'Amour walked away from Tool in 1995, during the recording of Ænima, he had one mission: to avoid letting his role in that band define him forever. Known solely at the time as the heavy-picking bassist behind powerful songs such as “Sober” and “Prison Sex,” D’Amour immediately began taking on projects that showcased his diverse range as a musician: He played guitar in the psychedelic pop band Lusk, formed a cover band called Replicants, flaunted his multi-instrumentalist chops with his solo project Feersum Ennjin, and composed music for movies and television shows.

But after years of redefining himself and sidestepping his identity as a bassist, the 47-year-old has come full circle. On the self-titled debut by his new band, Lesser Key, D’Amour is picking up right where he left off: coaxing signature tones from Music Man StingRay and Rickenbacker basses, and channeling elaborate rhythms and dark melodies in the pursuit of ultimate creativity.

How did your time in Tool affect you as a musician?

That experience changed my DNA. To go from 0 to 100 miles an hour in the span of a year was incredible. All of a sudden, we were playing in front of huge crowds, and we had a ton of success. It gave me a lot of confidence to do anything I wanted to do.

Do you have any regrets abut leaving Tool?

I wish it had been a better vehicle for me to create in, but it just wasn’t. Their creative process is excruciating and tedious, and I guess I never felt the desire to play a riff 500 times before I can confirm that it’s good; that’s why it takes them eight years to write an album.

I always wanted to do other things, and it felt like I was too much in a box with that band. They’re set up where the bass player does the bass part and the guitar player does the guitar part and so on. I couldn’t be stuck in that paradigm– it’s too stifling. I’m not just a bass player; I’m a creator, I wanted to have a bigger role, and it just wasn’t happening in that situation. In the end, I knew leaving was the right decision.

What inspired your writing for Lesser Key?

I was just trying to find the power in the songs. The melodicism was already there, so I wanted the role of my bass to be powerful and make a big impact. I wanted to add that punchy “Paul D’Amour sound,” so I tried to do that thing, whatever that thing might be.

How did you create your tone this time around?

This record had to be done quickly, so I used guitar rigs for the basic sounds; a guitar amp can give you a nice tone and some warmth. My pick work dictates most of my sound. I can play through a lot of different basses and amps that are nothing alike, and it will always sound like me. If you could put a grand piano through a Marshall, that’s how I would best describe my sound.

How does your writing style change from project to project?

I just follow the thread. I feel like songs write themselves if I stay open and become a channel for creativity. It comes from wherever it comes from, but I haven’t figured it out yet. It’s the universe, I guess. I keep finding that emotion and following it, and then it keeps building on itself. When I listen to my songs, even though they’re vastly different, I feel like there’s a common thread that connects them all no matter what the project is.

What drives you to write such in-your-face bass lines?

I’m not a background player. I never have been, and I never want to be the guy who hangs out by the drums and just walks the dog. I like to write impactful parts and rock them out. There’s no reason the bass shouldn’t be right up front. I always believe that my parts are more important than the guitar player’s.