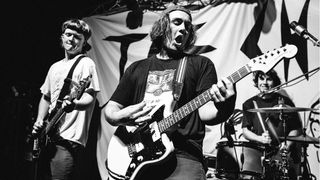 When we talk punk rock, we often talk about three chords and those being enough to capture its whole aesthetic. As though that’s all you need. But that alone doesn’t get you there.

You’ve got to find a way of capturing a punk intensity, of getting that attitude into a recording. The Chats, a gloriously unworked and uncouth punk trio from Queensland, Australia, applied a simple rule to the making of their debut album High Risk Behaviour: you get three takes and that’s it.

As guitarist Josh “Pricey” Price tells it, forget rehearsals. Playing in The Chats isn’t an office job. “We’d just go into the studio with no songs and then whack for a day and come out with four,” he says. “And we don’t really know how to play them still. There are like four songs on the record that I don’t even know how to play.”

Does he worry about having to play them live? “I am a big fan of Joe Walsh and he said, ‘If you act like you know what you are doing, everybody thinks you do,’” says Pricey. “That’s a good bit of advice, I reckon.”

The Chats were formed in 2016. They played as a four-piece for a short while before paring it down to a trio with Eamon Sandwith on vocals and bass Matt Boggis on drums. A very modern kind of fame found them in 2017 on the back of a viral video for the track Smoko named after Aussie slang for a cigarette break.

Thereafter, things changed. They found famous fans in Iggy Pop and Dave Grohl, and toured with Queens Of The Stone Age. Their headlining tours now have them playing theatres, not clubs. “Everyday it’s like you’re pinching yourself,” says Pricey. “I was washing cars in a car dealership. Eamon was a checkout chick at Coles. Matt never really had a job.”

The Chats are a full-time concern, but their approach is still DIY. A mate manages them. They formed their own label. Their sound remains unevolved from those early days out in the boonies, playing in their mate’s shed.

“He’d have a pool table and a big fridge, ping-pong and darts, a couch, a big generator,” recalls Pricey. “We’d set it all up and just used to sleep on the couches. Oh, dude, we used to jam non-stop. We’d go over after school or work and jam all night because we were out in the middle of nowhere. No one could hear us. We could just jam until two in the morning or something, then wake up and go to school or work. It was great.”

The Sunshine Coast features miles of unspoilt beaches, small towns separated by bushland. The heat can get the better of you, as can the drink. It feels sleepy, but kind of lawless too, as though everyone is left to their own devices.

“Yeah, totally, it does feel a little bit like that,” says Pricey. “It just feels like we are on the moon sometimes.” There’s plenty of wide-open space for misadventures, and the songs on High Risk Behaviour are full of such stories, such as The Clap, which is a skronky shout-along number about venereal disease, complete with thematically apt hand-claps.

Every track on High Risk Behaviour is written from experience. These grubby stories about the drink, the bongs, the clap… “I just write about things that actually happen,” says Pricey.

“I dunno, people just write shit and I can’t. I have to wait for something to happen, something to really piss me off.” Once the story is in place, it’s given the same treatment; simple arrangements, fast, loud and brief.

Pricey mostly tracked the album with a rare solid-body Takamine GX100 electric that’s shaped like an Explorer, though he uses a Jazzmaster as well. These will invariably go through a Fender Twin, with an always-on EHX Soul Food for that Chuck Berry breakup.

“I have the amp on pretty clean and then I’ll put that on with a little bit of drive to get that thickness,” says Pricey. “But not too thick. I still like that twang.” He cites Berry, Stevie Ray Vaughan and Angus Young as his heroes, and brings 12-bar blues riffs into The Chats’ arrangements. He’ll also use a Crowther Audio Hot Cake for solos.

Are guitar solos punk? “I think people are getting the wrong understanding of punk,” he says. “Punk is an attitude. I might say we are a rock band but everyone calls us punk, and I get it.”