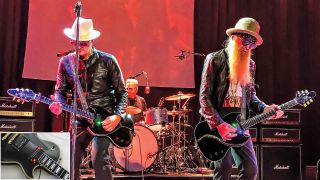 One afternoon, Andy Alt — who has spent a decade working with artists as a touring guitarist and with Steve Vai as his online marketing director — was jamming with a drummer and thinking it would be nice to have a bass tone in the mix — “but without adding a third party,” he recalls. Whereas most guitarists might just reach for an octave pedal, Alt chose a different path: He designed an entirely new piece of equipment — a revolutionary pickup that’s now on the market under the name A Little Thunder.

The pickup fits into any guitar with a humbucker rout and allows the player to drop the bottom one, two or three strings by -1 octave or -2 octaves, offering the ability to get a dedicated bass signal without making any physical modifications to the instrument. To compliment the octave-drop mode, there’s also a “low note priority” option that detects the lowest note being played (for example, in a five- or six-string barre chord) and gives the bass effect to only that tone. Essentially, A Little Thunder is an octave effect but one that, unlike a stompbox, offers near-zero latency and the ability to assign the pitch-shifting to particular tones and strings.

Alt, who designed and builds A Little Thunder in Los Angeles, completely sold out the pickup’s first run. Among the early adopters was ZZ Top’s Billy Gibbons, who used the pickup on his Big Bad Blues tour, where fans got “double the bass with no bass player present” as Gibbons and band mate Austin Hanks each employed A Little Thunder throughout the entire set. When contacted by Guitar World, Gibbons offered praise as only he can: “When low is the way to go,” he told us, “A Little Thunder is it, fo’ sho!”

Now, Alt is unveiling A Little Thunder 2.0 (Gibbons used a preview version of the new pickup on his tour). It builds on the original design with a more powerful passive humbucker and several under-the-hood updates. “As is the case with the original version, when the pickup is off, you’re still going to get a great-sounding 9.2k PAF Alnico V humbucker,” Alt says, adding that he also doubled the capacitive touch sensors and added Bluetooth capabilities.