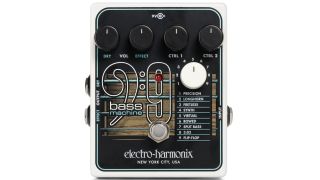 The nine bass sounds included are Precision (Fender P Bass), Longhorn (Danelectro six-string bass), fretless, synth (an homage to the Taurus Synthesizer), Virtual (allows the user to adjust body density and neck length for a variety of bass sounds), bowed, split (allows guitarists to play bass on the lower three strings and chords or melody on the top three), 3:03 (polyphonic sounds that recall the Roland TB-303) and Flip-Flop (a Seventies-style logic-driven sub-octave generator that tracks without glitches).

The Bass9 utilizes the same technology that powers all EHX 9 Series pedals, including the MEL9 Tape Replay Machine, with a new algorithm maximized for transposing one to two octaves down.

For more information, head to EHX.com.