Skip to main content
Sponsored
Guitar World is supported by its audience. When you purchase through links on our site, we may earn an affiliate commission. Learn more 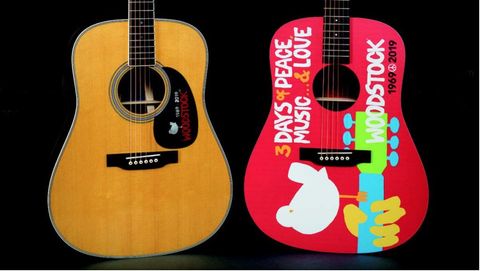 This year, the original Woodstock Festival celebrates its 50th anniversary. That event was the climax and ultimate realization of the hippie counterculture and all of its lovely, peaceful ideals.

It was billed as 3 days of music, peace, and love and by almost all accounts those days were indeed completely void of violence. More importantly, Woodstock was the site of some of the most important live performances to ever take place in rock history.

Between blistering sets Hendrix, Santana, Crosby, Stills, Nash & Young, The Who, and Johnny Winter, Woodstock’s most iconic moments were powered by guitars.

The counterculture of 1969 existed in large part because the folk singers of the mid-60s had evolved into the original singer/songwriter generation after following Dylan and the Beatles lead. With that revolution and sea change, the acoustic guitar evolved into something much more than just an instrument of accompaniment: it became the prime vehicle of self-expression and was intrinsically tied to the vital youth culture of the day.

Just like Woodstock, the acoustic guitar became an emblem of change and hope. As a partner in crime for those with the desire to express themselves through music and their own tunes, Martin’s acoustic guitars have provided an incomparable companion for the lion’s share two centuries; they’ve weathered and endured through every change Western music has experienced and were wielded by many of Woodstock’s most beloved performers.

In that spirit and in partnership with Woodstock’s founders, Martin has introduced a trio of guitars to commemorate and celebrate the 50th anniversary of those 3 beautiful days on Yasgur’s Farm in upstate New York.

This X Series D-14 model produces the rich, dynamic sound and its unique finish evokes 1969. It pairs an HPL top with a rosewood-patterned HPL back and sides and also includes Fishman electronics. This model also includes certified sustainable wood parts.

This model includes all the features of the reimagined D-35, including an East Indian rosewood back and sides adorned with a 35 Series wedge and a Sitka spruce top with aging toner for a gorgeous vintage look, as well as antique white binding around the fingerboard.

It features expressive quarter-inch straight bracing for balanced power and a high-performance neck taper for comfort up and down the fretboard.

This guitar features special artwork of the iconic Woodstock dove perched atop Martin’s alternate torch design on the headstock and '1969–2019' adorns the fingerboard. The special touches are capped off by a peace sign on the heelcap. This special D-45 includes an embroidered ply hardshell case and is limited to a run of 50 instruments.