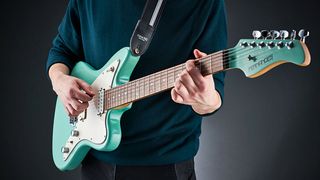 Ever heard the idea that scales are hard to learn? Well, we’d say different! Some scales are almost identical to chords you probably already know – that makes them easier to remember and also tells you that the chord and scale are probably going to sound good together.

Don’t get it? Read on as we show you how to write new lead guitar ideas starting with a chord and a scale.

Here we are going to look at the A chord and the A major pentatonic scale. Once you learn the shapes move on to the lick below and see how they combine to create interesting lead guitar licks.

The idea here is to see how the chord, scale and lick all relate to each other – the three shapes are pretty similar. Play the A chord with a first-finger barre. Your third finger should fall into place.

Jimi Hendrix used to thicken his lead lines with doublestops. This lick shows how he might have combined them with a bluesy bend. Try branching out your ideas by using other notes from the chord and scale.

Finally, let's look at how a G7 chord can be combined with a G Mixolydian scale for a solo idea.

This laid-back melody is inspired by the North Mississippi Allstars’ softer moments. Once again, play close attention to the lick’s feel and try some more ideas with other scale and chord notes.