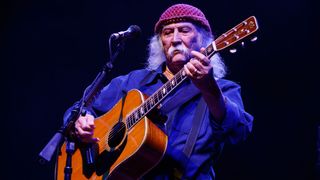 David Crosby has been through more than his fair share of challenges over his five decades-plus in the music industry, but the past year has brought about some particularly troubling times for the songwriting legend.

In a new, wide-reaching interview with Rolling Stone, Croz revealed he was facing up to the recent tragic death of his son, the financial implications of the coronavirus, America’s environmental and political future - and the fact that he may never play guitar again.

“I get trigger-finger tendonitis in my hands,” Crosby explains. “I went in to get it fixed and it didn’t work. Now I’m in a tremendous amount of pain in my right hand. It’s entirely possible that I may never play guitar again.”

If he is unable to get treatment for his condition, Crosby intends to sing without his trademark Martin acoustic guitar slung around his shoulder during any forthcoming rescheduled tour dates - which he concedes may be his last.

“The thing that happens to me is I’m not sure I’ve got a next year,” he says. “I’m almost 80 years old. So when you take away my next year, you might have just taken the last one I got.”

Croz is, however, more positive about his forthcoming solo album, which features fellow songwriting royalty in the form of Michael McDonald and Donald Fagen.

“We’ve got three singles. I’ve never had singles before, but I’ve got three of them this time. I got one we wrote with Michael McDonald that’s just killer. That’s River Rise and Michael sings harmony with me on it. He and I kill it. When we sing together, it’s scary.

“And then we’ve got a song that I wrote with Donald Fagen. It’s really fucking good, man. I’m so honored he gave us a set of words.