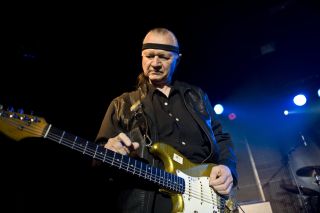 Surf guitar legend Dick Dale passed away on March 16, 2019 at the age of 81, and since then family and friends have set up a GoFundMe page to cover the medical expenses that accumulated in the latter years of his life.

In a 2015 interview with the Pittsburgh City Paper, Dale detailed his extensive health issues, saying “I can’t stop touring because I will die... Physically and literally, I will die.” He went on to say that the medical supplies he needed to remain alive costed over $3,000 a month, and kept him on the road consistently despite near-debilitating health problems.

“When I go on stage, I’m in pain every night," Dale said in 2015. "But through the martial arts, I’ve learned to guide and deal with pain. I play harder now than I ever have, and honestly when I go on stage I push a button. I swear at the pain. ‘Get out of my damn body; I’ve got to do a job!’”

Additionally, GraphTech has sent up a tribute page to the surf guitar pioneer. The company said: “Dick was a great friend of GraphTech and a prominent crusader of String Saver saddles—he broke a lot of strings before he switched to String Savers. Graph Tech will contribute 10 percent of all String-Savers sales from May through June to the fund. Any memory you can add to the conversation or donation you can make to the fund will be greatly appreciated by the family and the legacy of the King of Surf Guitar.”

You can contribute to the fund here.