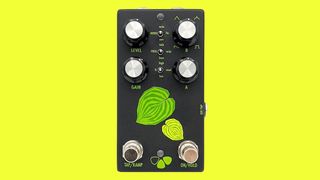 The pedal sports an analog filter with digital control, with Flower touting that the analog circuitry is “based off the most well-known wah in history,” and utilizes a genuine red fasel inductor.

There are also three different wah modes, Auto, Fixed and Envelope, with each mode controlled via a Tap/Ramp footswitch and A and B knobs. Further tweaking is available by holding the On/Hold footswitch.

In Auto mode the wah is controlled by an LFO, with four different, continuously variable shapes available. Additionally, the Tap/Ramp switch allows for tap tempo with subdivisions and ramping.

Fixed mode, meanwhile, allows the user to set the position of the wah filter. The Tap/Ramp footswitch can then move the wah to a second position, set to the speed of the user’s choice. In this mode, the Hosta works somewhat like a standard wah, only controlled via the tap switch. An expression pedal can also be connected for more traditional wah functionality.

An Exp/Tap jack on the side of the enclosure allows for either external tap connection or an expression pedal to control the Tap/Ramp functions, while an internal switch allows you to choose between expression and tap.

The Hosta Wah Filter is available for $279. For more information head to Flower Pedals.