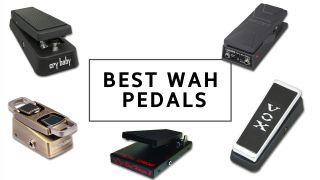 Far from being just an excuse for solo histrionics, the humble wah pedal is a versatile tone-shaping tool and, well, the most expressive of all expression-based effects. The question is – which is the best wah pedal for you? You can be forgiven for not having given it more thought in the past.

Luckily, we've seen a million wahs, and rocked 'em all, and we're in the perfect position to recommend a host of options that don’t just stop at the standard Cry Baby that everybody uses. But we're not knocking the CB, either. Hey, if it's good enough for Tom Morello…

Amazon Prime Day is just around the corner. If you're looking for a new wah pedal then it could be worth waiting until the Prime Day guitar deals start landing.

In terms of voicing, the Vox V847-A – or emulations of it – suit a lot of playing styles, from electronic projects to straightforward rock bands. For more 'momentary' style use of the wah-wah for phrases and shorter leads, you might want an auto-returning wah, in which case the Dunlop 95Q, one of the signature Dunlop units or the Morley Steve Vai Bad Horsie 2 Contour Wah would be the way to go.

If, however, you want something with maximum flexibility, and you already own or are planning on getting an expression pedal, then the EHX Cock Fight makes sense. It does the job, sounds great, has a variety of options and can function as a 'normal' wah as well. It's a bit more expensive, but it more than makes up for that in terms of features.

Wah pedals are relatively simple, so there's not a ton of decisions you need to make when deciding between them. Generally, each manufacturer's wahs have a specific voicing, range and Q for the filter, although there are some that allow you to tweak that. Almost all wahs are bandpass filters, meaning that they boost a specific range, or 'band' of frequencies.

The mysterious 'Q' comes up a lot when discussing wah pedal filters. In technical terms, the Q of a filter is the ratio of centre frequency to bandwidth. An easier way of thinking about it is simply narrow or wide, where wide affects more frequencies and narrow is more focussed.

We tend to think of the 'classic' Dunlop Cry Baby as a good baseline sound for what to expect from the best wah pedals. The Cry Baby is very bright, verging on harsh, or even shrill, with the toe down, whereas generally, Morley voicings are a bit darker, and the Vox is somewhere in between. The Vox certainly has enough treble for piercing noise-rock, but a little less harsh with the toe down.

Obviously, there's no substitute for using your own ears, or for trying a variety of wah pedals through a similar setup to your own - and picking up a wah with adjustable range and Q ensures you can tweak the pedal to your liking.

Some bass wah pedals are low-pass filters, so that they preserve bass frequencies, no matter where they are set. This leads to an interesting point – although wahs are bandpass, because of attenuation that occurs outside of the band, especially when they're closer to the 'toe down' position, they'll sound quite a lot like a variable high-pass filter. This may influence your decision in terms of how bright you would like your wah to be.

Finally, there's the question of bypass. Many modern wahs are true bypass, but several models still introduce 'tone suck' and form the subject of lively discussions that have been ongoing on forums for decades.

If you like the voicing of the Dunlop Cry Baby but want extra control, then the 535Q is the answer – and it's now available in a mini format, ideal for crowded pedalboards. The 535Q gives you control over two of the most important parameters – frequency centre and width – which allows you to modify the Q of the unit, and even offers a switchable boost for extra output.

What does that mean in practical terms? It means that you can fine-tune and customize the voicing of the wah and its filter. If you've not found a wah that quite works for your sound, but know you do still want one, then the 535Q is worth a try.

For a modern take on the wah sound

The Boss PW-3 is an analogue pedal with two modes. The first emulates what they call a classic wah sound – which means a Dunlop Cry Baby – while the second mode is called 'rich' and includes filtering to leave more of the lower frequencies of the guitar in the signal no matter what position the wah is in. This may be desirable if you're the only guitarist in a band, for example, but it does tend to diminish the effect of the pedal.

As you'd expect from Boss, it comes in a rugged, bomb-proof enclosure, and this is really where it shines. The switching is better than classic units, the buffer is more modern and the form-factor a little more compact. It's also got a useful status LED so you know if it's on at a glance.

The original and best wah pedal

Vox were responsible for bringing the first wah pedal to market – the Clyde McCoy – which was originally not even aimed at guitarists, but wind players. Mimicking the effect of a mute used on a trumpet as a filter, the Vox was the first mass-market wah, although players like Chet Atkins and Peter Van Wood had been homebrewing units to achieve the same effect as early as the 1950s.

Early adopters included Hendrix, Zappa, Gilmour and Page, and although Dunlop rather stole a march on Vox in the marketing stakes, we've always found the Vox to be closer to the classic wah sound that we had in our heads. There's something subtly different about the voicing and filtering that makes it more musical to our ears.

The best wah pedal for that classic sound

The Cry Baby is without a doubt the most recognisable wah pedal in the world. It's been used by everybody from Hammett to Morello, with each player making the pedal their own.

It takes its name from the original mass-market wah, the Thomas Organ/Vox Cry Baby. Since Vox didn't trademark the name, it left them open to other manufacturers pinching not only the design, but the name as well. Although Hendrix and David Gilmour are said to have used the Dunlop, it seems more likely that they mainly relied on Vox units, given the photographic evidence available and the fact that Gilmour's Vox has been publicly exhibited.

Nevertheless, the Dunlop Cry Baby has become the signature 'wah' sound, and if you're unsure of which option is for you, this is the best wah pedal for you.

This wah delivers a smorgasbord of options

Parked wah effects are not super common – we can only offhand think of the intro to Muse's Dead Star and Dire Straits' Money for Nothing, but Electro-Harmonix is an eccentric company, so it makes sense they'd design a versatile filter and fuzz around the concept.

The wah section has volume, frequency and tone controls, as well as a voicing switch that goes from emulating a Cry Baby to more of a talk box tone, while the fuzz can be switched between being before or after the wah, as well as changing its bias, for dying battery fuzz tones.

The voicing of the Wahter isn't that dissimilar to a Cry Baby. Its main selling points are the obvious – that it's even cheaper, and absolutely tiny. If you don't have the pedalboard real estate for a full-fat wah, then there's a good chance you can fit the Wahter, as it's only slightly larger than a standard Mooer mini pedal.

That's essentially its main strength, as well as its main drawback; we've tended to find that mini wahs and expressions don't work so well for us, as our big feet mean that practically we can't fit pedals above or below it anyway. Still, we know people that have found the opposite; especially if you're less clumsy than us, the Wahter could be a brilliant compromise for a packed board.

The master’s wah of choice

£199.75
View at Amazon
The classic Vai wah sound
Customisable contour mode
Voicing might not be to your liking
Momentary switching isn't for everybody

Steve Vai's signature wah is the most popular in the Morley line, and so unsurprisingly it's become somewhat synonymous with their wah voicing. This new and improved version of the Bad Horsie has some improvements on the original. Most notably there’s a second contour mode, which allows you to adjust frequency and tone of the pedal – in effect, its voicing – to your taste.

The pedal engages when you step on it and move it from the heel down position. This momentary action is useful if you're using it in short, sharp bursts, and is in common with some of the higher-end Dunlops, but we have seen complaints online about how it works as well, so it's probably best to try it for yourself.

There's also a footswitch to bypass the wah entirely, which could be useful if you're a tone purist.