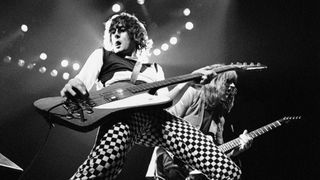 The news was broken in a statement posted on his official Facebook page, which reads, “Iconic bass player Pete Way founder of UFO, Waysted and, latterly, The Pete Way Band has died.

“He sustained life threatening injuries in an accident two months ago but fought hard until finally succumbing to those injuries at 11.35am BST today. His wife, Jenny, was at his side.”

UFO released a string of successful albums with this line-up before Way departed the group in 1983 to briefly form Fastway with Motörhead guitarist “Fast” Eddie Clarke - but left that project to play with Ozzy Osbourne on the Diary of a Madman tour.

Waysted released eight albums, their success peaking with third album Save Your Prayers. Way put the group on hold for much of the '90s to join the reformed UFO in 1992.

Way was known for his love of the Fender P-Bass during UFO’s original tenure, but later switched to Gibson and Epiphone Thunderbirds, citing a harder tone.

In the past decade, Way battled a number of health conditions, including prostate cancer in 2013, and a heart attack in 2016.

He had recently finished a solo album, Walking on the Edge, with Guns N’ Roses producer Mike Clink.

His UFO and Waysted bandmate, Paul Chapman, passed away in June this year.

Stars from the world of bass and guitar have paid tribute to Way on social media, including Michael Schenker, Geezer Butler, Kirk Hammett and David Ellefson. We’ve shared a selection below.

"Oh my Dear PeteI am so sadYour sweet existence has left us. I am in tears. You were more than you maybe knew.You were loved by everyone I know.I love you Pete.God Bless You Forever.My condolences to your loved ones.From the depth of my heart."Fly away and enjoy Heaven" pic.twitter.com/HYpeOUe4oBAugust 14, 2020

This year keeps getting worse. Pete Way, one of the “characters” of metal and fellow @AVFCOfficial supporter has passed. He supported Deadland Ritual on the show in London. Very funny man. RIP Pete. pic.twitter.com/HtX2Iu152TAugust 14, 2020

Very sad to hear of the passing of Pete Way today. The "Strangers In The Night" live album is hands-down one of my all-time favorites, and for me the highlight of the UFO lineup of that day. Pete and his girlfriend actually came to see Megadeth on the Clash of the Titans tour at the Birmingham NEC Arena in 1990 where Dave Mustaine and I had a brief conversation with him just before we took the stage that evening. It's always impactful to know your heroes are in the audience for your show, the same way I was for his show with Waysted opening for Iron Maiden several years before at Irvine Meadows, CA. Pete's look, his style, and his simple but powerful bass lines were a highly influential force to my own playing. He will be dearly missed....RIP! #ufo #peteway #waysted David Ellefson

Such sad news about @PeteWayOfficial. Haven’t seen him for years but will always have great memories & such unbelievable stories of what we’d get up to. Rest In Peace. Love & Respect to his Family, Friends and FansAugust 15, 2020

Pete Way was a huge influence on me , he was uncompromising musically , and he was a great performer . He had a unique feel and wrote some of my all time fave songs . My heart goes out to all his friends and family . PETE WAY R.I.P. ! 🖤 #peteway 📸by @rosshalfin Kirk Hammett

RIP Rockstar. One of my main influences. Gotta go listen to some UFO tonight. Posted 🖤 @withregram • @rosshalfin Pete Way RIP…. It is with the greatest of sadness I post this. Of all the people I’ve known and toured with, in his day Pete was the most fun and he remained a good friend. ‘Light’s Out In London’ really says it all. #rosshalfin #peteway #ufo Nikki Sixx

Sad to hear one of my favorite bass players, Pete Way from UFO died today. UFOs live album “Strangers in The Night” is one of the best and I’m grateful that record helped me grow up in music and as a guitar player. 1/2 pic.twitter.com/7v6dK185PLAugust 14, 2020